It Came From Under The Covers.

Time to start the year off right. Here’s my review of the outstandingly outrageous flick Death Bed: The Bed That Eats! 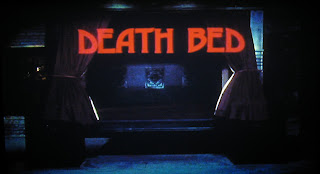 I can’t even recall where I found out about this movie. I think I saw the title on a message board somewhere and immediately was like, ‘I HAVE to see this movie!’ It’s funny because I had an idea like this when I was a kid, lying in bed at night thinking ‘children get under the covers to protect themselves from the monster. What if the monster WAS THE BED?!’ Yes, talking about my childhood really does give you a blood-streaked 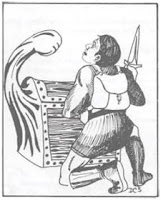 window into my skewed psyche, doesn’t it? It is more likely that said idea came from regular viewings of The Blob and copious amounts of D&D. So, imagine my surprise to discover that when I was having those thoughts, someone had already put them to film. Although, Death Bed: The Bed That Eats would not see an official release for another twenty-six years.

Death Bed is quite a strange case because it maybe the only movie in history to acquire a cult following while never actually having been released. In the DVD introduction, director George Barry explains that he was as shocked as anyone to be on Internet message boards during the nineties and come across conversations from people who had seen the film, even though Death Bed had never seen the light of day. It took some more investigation and correspondence with musician/horror scholar Stephen Thrower to find out that pirated copies of Death Bed had been circulating in Europe for years. Finally, in 2004, the distributor Cult Epics released an official DVD. 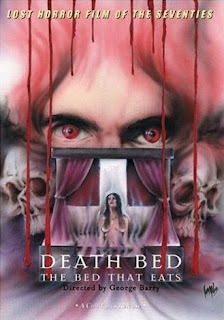 Now, onto this delightful oddity of a movie. Death Bed: The Bed That Eats is equal parts ridiculous and hilarious. Now matter how crazy you think this movie could be, the real thing trumps it. I have no trouble seeing why Barry struggled to get this thing distributed, but I’m glad it’s out there now because people need to see this. Death Bed should have been as infamous as Attack Of The Killer Tomatoes. You know what it reminds me of? It plays like one of those faux trailers in Grindhouse, but imagine an entire movie like that. And I don’t mean just your average fare from that era; I mean an entire feature that is as outlandish in its entirety, as it is in trailer form. Even though the movie is drolly narrated by the ghost of one of its victims, the star of the film – and rightly so - is The Bed. And it doesn’t just sit there. It yawns, munches, slurps and even gets indigestion! 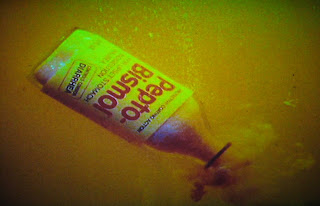 I can't MAKE this shit up!

As you would expect, Death Bed is a steady procession of WTF moments. Yellow soap sud digestive juices, wind demons and characters that have whole inward conversations with themselves all add up to a one-of-a-kind experience. Here’s just one example of the absurdity. Two gangsters are playing poker on the bed – I know, strange in itself – and they start getting eaten and fire their guns into the bed sheets. However, it seems that the Mr. Foley quit halfway through the scene and thus no gunshots. Hilarity ensues. Seriously, as much as I could go on about it, Death Bed really needs to be seen to be believed. Barry’s kitchen sink attitude makes me think he must have known he was making a turkey, but it often isn’t served up as such. Yet I wouldn’t want it any other way. To me, I am thankful that we live in a world where movies like Death Bed exist.

My only regret is that I saw this alone. I only wish that I had likeminded people by my side when I watched it. For a get together of b-movie enthusiasts, Death Bed: The Bed That Eats is a must watch.
Posted by Jay Clarke at 6:41 PM

Patton Oswalt did a bit about this movie a couple years ago and singlehandedly brought it to the public consciousness. Not to mine, but that's just because I happened to have it on a double feature DVD with "Castle Freak." If it's only recently that you heard about it, thank Ratatouille.

Greatest punny title for a horror flick ever. Well, no, it's not as good as "Blood Shed", but that one's really obscure.

Did I mention before that I hate you for this? Cuz I do!!! :P

I caught this in San Francisco a few years back (2003, maybe), so I got to have that special smug glow of insider knowledge when Patton Oswalt was talking about it. And you're right, no matter how crazy you think it might be, the reality is worse -- or is it better?