Ants In Your Pants

After another trip down that lonely alleyway, I was once again in the colourful depths of Trash Palace. This week’s feature was the 1974 super-ant sci-fi flick Phase IV. They really trot out the oddities here at the Palace. I don’t think I’ve seen this one anywhere since it was collecting dust on my shelf at the ol’ video store and it’s been even longer since I’ve actually watched the damn thing. 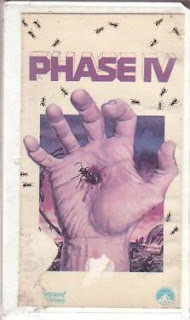 Phase IV was directed by Saul Bass. Yes, THAT Saul Bass. For those not up on their film history, Bass spent the better part of his career working with many great directors, including Alfred Hitchcock. You know those unique title sequences that appear in a lot of Hitchcock’s movies? Well, Saul Bass designed those. And you know the iconic shower scene in Psycho? It was Bass who envisioned the way that played out. The man had an eye for cinema the way few do. Phase IV lives up to those expectations by serving up a visual treat. It is stunning, including lots of macro photography on the film’s real stars – the ants. There is a LOT of this stuff, but strangely it never feels like you are watching a nature documentary. This could likely be due to the accompanying score that ominously permeates the piece. 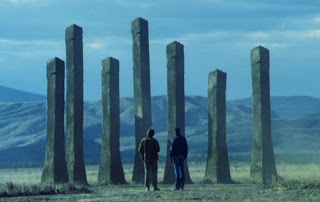 Back up, gentlemen. Back the fuck up.

Apart from the great cinematography though, the film is fairly light in every other aspect. The story is pretty rudimentary and plods along at points. Again, is often the case when revisiting old movies, I was surprised by how much I’d forgotten. I'd held onto mere pieces really, but the ending was still puzzling. The film stars instantly recognizable character actor Murphy and the stunning Lynne Frederick, who coincidentally also starred in my last Trash Palace flick Schizo. Frederick doesn’t have much to do in Phase IV, except walk around in a daze, but dayam, she is fine. It’s really too bad what happened to her in real life. If Phase IV wasn’t so adeptly shot, it may have been a loss, but I was completely hypnotized (which could also be because I was in the front row – about eight feet from the screen – this time) for its duration. What another great trip down memory lane!

Trash Palace also announced its Spring/Summer lineup! There are some good ones coming up. 13 Frightened Girls! Smashup On Interstate 5! Scream and Scream Again! Silent Partner! Oh boy, things are looking up.

Its funny, that even though I first saw this film, back when I was a kid, the part where one of the guys falls into the ant pit, still sticks with me, along with several other scenes, so might have to revisit myself now.

That's so crazy! That's the scene that stayed with me all these years too, after I first saw it as a kid. Not surprising, it's not a particularly nice way to go, is it?