It has been a long time since Clive Barker directed a film. After clashing with Hollywood's bottom line philosophy, Barker returned fully to his first loves, writing & painting, where he had total control again. Sure, several of his works have been adapted in his absence, like Midnight Meat Train and the upcoming Dread, but they rarely pop with the enthusiasm that made films like Hellraiser and Candyman stand the test of time. Such is the case with last year's adaptation Book Of Blood which I watched a few days ago. 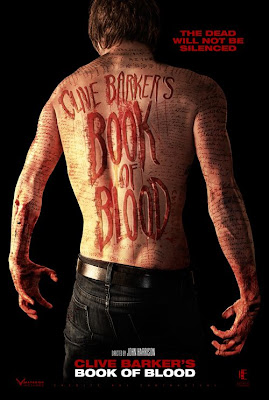 When drifter Simon McNeal (Jonas Armstrong) is abducted by a psychopath, he tells him the tale of the Book Of Blood – which has been carved into his skin – in exchange for a quick death.

Book Of Blood is actually two Barker short stories combined into one narrative. The first is the title story, which appeared in Volume One of his Books Of Blood collection and the second is a tale called “On Jerusalem Street”, a postscript from Volume Six. Book Of Blood did remind me a tiny bit of Hellraiser, but there is not enough interaction with the denizens of the other side to really make it interesting. The story has a lot of the eroticism and elements of the fantastic that we have come to expect from Barker, but without his guiding hand behind the camera, something seems lost in the translation. It is certainly not a bad film. The acting is good, the effects solid and it actually starts out really strong with a girl being attacked by a spectral force and having her face violently peeled off, but it never reaches those lofty heights again. 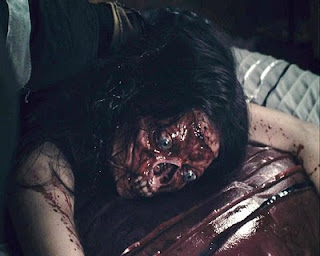 I think the main thing that disappointed me was what Book Of Blood wasn't. Obviously, this doesn't reflect badly on the film, but I wanted this movie to be an anthology. It certainly seemed that it was going to be early on when Simon began to tell his captor of the tale etched into his skin. So the story started and a half-hour in I started thinking, is the next story going to come on soon? It is too bad that more stories weren't worked in because Book Of Blood does tend to meander a bit in the middle, suffering from the common problem of a short story padded to feature length. 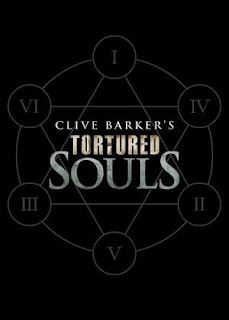 It has been fifteen years since Clive Barker sat in the director's chair. And after his past experiences, I don't blame him. But we miss you, man. He IS working on the film adaptation of the Tortured Souls series, so hope is alive, but I keep having this terrifying vision. Of Hollywood bigwigs. Standing in the shadows, like Cenobites. Wearing suits instead of leather, wringing their hands together and just waiting to get their hooks into his final cut.
Posted by Jay Clarke at 10:04 AM

I've given up hope for a Tortured Souls movie. I fear it will never happen. Almost every project Todd McFarlane has been involved in hasn't been able to get off the ground.

You know I just remembered? That Bernard Rose directed Candyman, not Barker. That just goes to show how in synch they were I guess.