This weekend, I finally got around to watching Black Water, a 2007 killer-croc from Australia that I’d been hearing good things about. 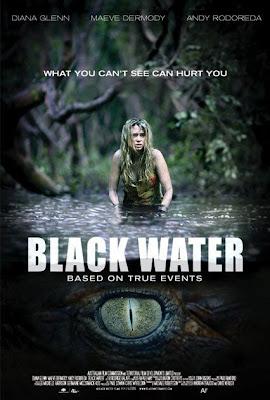 While fishing in a mangrove swamp, three vacationers and their river guide are set upon by an unusually ferocious salt water crocodile intent on making them its next meal.

I have to say that I was super impressed by Black Water. Incredibly simple, Black Water boasts a tiny cast and packs an almost impossible amount of suspense into such a small production. My hat goes off to directors Andrew Traucki & David Nurlich for pushing the limits of their low budget (around $1M) and making realism their top priority by choosing to not employ CG effects. Instead, they relied on compositing, which looked extremely convincing and some of the best work I think I’ve ever seen. Some shots I didn’t even realize were added in until I watched the accompanying ‘making of’ documentary on the disc. In fact, the actors never even came in contact with the real thing! Finding this out made me respect the actors even more. Diana Glenn, Maeve Dermody & Andy Rodoreda all turned in fine performances, but now I knew they had to project extreme emotion to tennis balls and voice cues. All the crocodile footage was taken separately by Traucki at a breeding farm. Actually, there was a joke that the producer asked if it was really necessary to insure the director because they had a spare. The featurette also showed you what a well-oiled machine the crew was, only having three hours a day to shoot – at least anything wider than a close-up – while the tide was in. 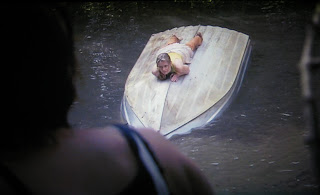 Not where you want to be.

So, let us move onto the inevitable comparison to Rogue, the other 2007 Aussie killer-croc movie. Well, Black Water is definitely the more realistic of the two, which is no in small part due to how they decided to shoot it. Overall, I’d say Rogue still has an edge because it has more characters and a bit more happens, but you can’t go wrong with either in my opinion. Traucki & Nurlich are definitely directors to watch and I am now REALLY looking forward to the former’s next project The Reef. If he shoots sharks as effectively as he does crocodiles, I might be watching it through my fingers.

As far as small budget horror goes, Black Water is as good as it gets.
Posted by Jay Clarke at 10:01 AM

Will check this out very soon!

Yeah, I absolutely love how much magic one can do with editing. Seems interesting.