I've got a few goodies for you this week, so let's get right into it.
Here Fishy, Fishy.

This week, we finally got a trailer for one of this year's most anticipated horror flicks, Piranha 3D. Yep, it pretty much looks like what I was expecting. Aweeeesome! See it below.

Now, the bad news. It looks like the Weinstein Company have pushed back this little ditty to August. They say it is so they don't have to compete with Kick-Ass, but there have been rumblings around the Interwebs of another story. It is rumoured that the Weinstein Company is hemorrhaging money these days and by the time August rolls around, they might not have enough dough to even RELEASE the movie. Oh, Weinstein... why do you hate horror so much?
Camera Obscura.
I've been reading the tweets of Drew Daywalt's upcoming web series Camera Obscura for what seems like forever, and finally we have a trailer. Here it is below.

This looks super fucking wicked. I get a sense there is a real depth to this project and you can see from just the trailer that the creature designs are really something. No release date yet, but stay tuned.
The Biters Are Coming. 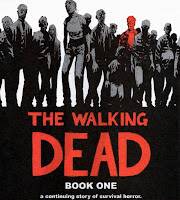 This week it was announced that AMC has ordered a pilot episode for the television adaptation of Robert Kirkman's long running comic series The Walking Dead. Now, with Frank Darabont and Gale Anne Hurd in the mix, I am optimistic, but I do have one reservation. Is AMC the right network for this project? Don't get me wrong, AMC has proved itself a solid contender with shows like Mad Men and Breaking Bad, but it is still not a full 'cable' network. Can they really go as far as they need to go with some of the material contained within Kirkman's zombie opus? This has happened before. My biggest problem with the television adaptation of Stephen King's The Stand was how sanitized it was. Will The Walking Dead share the same fate? Now, I know we've come a long way as far as what's allowed since then, but my apprehension still remains. I'll guess we'll just have to see.
Posted by Jay Clarke at 10:24 AM