Hey everyone! It's been a busy week here, so I'm going to get right to it.
Going Into The Light.

I tweeted about this earlier in the week, but I wanted to take the opportunity to elaborate on it. Actress Zelda Rubinstein passed away last Wednesday in California after a long illness. She was 76. Despite only taking up acting while in her late fourties, she racked up an impressive list of credits. She was obviously most well known for her role as Tangina, the medium who tried to help the Freeling family in the Poltergeist films, but I'll always remember her as Ginny, the speaks-her-mind dispatcher from the show Picket Fences. Also, anyone who hasn't seen the 1987 Spanish horror movie-within-a-horror-movie Anguish, should do so immediately. Rubinstein was also known for early activism in the fight against AIDS. R.I.P. Ms. Rubinstein.
There's A New Blog In Town.

My buddy Mike Schwartz recently started up a new blog called Cartoon and Horror. It's basically an archive of his two favorite things. The site is still in its infancy and amassing posts, but what I wanted to bring attention to was his new MIA on DVD segment. Here he sounds off about old titles that still have not been given the DVD treatment. First up, a movie that we have had many long conversations about. The Video Dead. Click the image below to check it out. 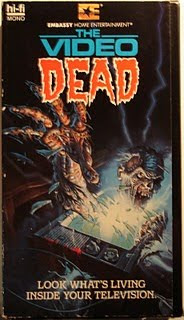 Up All Night Indeed.

This week, Jason Bene over at Killerfilm told me about this great site called Up All Night. This is my new favourite, ladies and gentleman. I've spent the last few days devouring its content. It is basically an archive of covers and trailers - and in some cases, links to full versions - of movies from the VHS era. It is split up into four categories; cheesy teen movies, midnight movies, slasher flicks and teenage sex flicks. My God, I'm in heaven. Blood Beach, The Prowler, Alone In The Dark and Junior are just a few of the flicks on display here. And then there's the ridiculous Oh-my-God-I-can't-believe-this-actually-exists-but-then-again-I-guess-I-shouldn't-be-surprised movie Over-Sexed Rugsuckers From Mars.

Click here to go to the site. I hope you have some free time.
Posted by Jay Clarke at 11:12 AM

Pretty nice post. I just came across your blog and wanted to say that I’ve really liked reading your posts. Anyway I’ll be subscribing to your blog and I hope you post again soon!

Thanks for the shout out Jay! A few of your readers made their way over to my site today. Hopefully they enjoyed some of it, since it is very cartoon-heavy right now.

I love UP ALL NIGHT! Great find. I could spend all day looking through the posts.