When I first heard Portable Grindhouse: The Lost Art Of The VHS Box was coming out, I was ecstatic. This wasn't the first to explore the covers of the VHS era, but it was the first to ever present it like THIS...

I think it is safe to say that video conveys the experience better than any screencap ever could.

This was an immediate buy for me and I was not disappointed. I loved devouring this. The nostalgia I felt while leafing through was so tangible, I could almost smell the plastic of the clamshells. Slithis, Mardi Gras Massacre (pictured right), Streets Of Fire, A Force Of One and a Halloween III cover I'd never actually seen before - they just kept coming one after another! I think my only qualm was how quickly I burned through it. I would have liked there to have been more text, as the five-page forward from author Jacques Boyreau - though excellent – goes by way too fast. I realize that the book is more a collection of art than a critique, but comments on some of the films being showcased would have been welcomed. Even as many covers as Portable Grindhouse has in it, I still feel Boyreau has only scratched the surface. I get the feeling that there could be many more volumes of PG on the way, and I'm all for it. 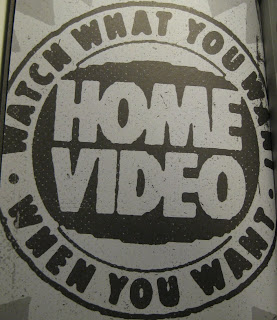 At a mere fourteen dollars on Amazon, I would urge anyone who grew up in the VHS era – or anyone who loves slashers & sleaze for that matter – to pick this up. And don't be surprised if after you have finished Portable Grindhouse, you have an overpowering urge to rewind it.
Posted by Jay Clarke at 7:49 AM

I hope you'll take time out of your busy schedule of posting awesome stuff to accept this award.