After yesterday’s review of Book Of Blood, it seems appropriate to continue the Clive Barker theme for this week’s Coverbox Wednesday. Though Barker has only directed three films (not counting his two early short films Salome & The Forbidden), his literary works have inspired many more. Here are the Clive Barker movies that made it into my store. 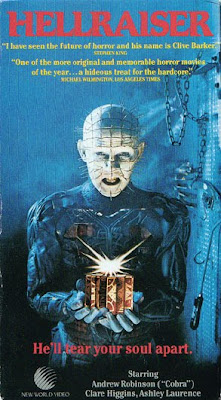 The artistic vision on display here is remarkable. The iconic Cenobites and The Lament Configuration are just a few of the fantastic things this movie is remembered for. 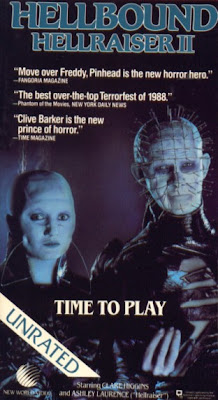 Though Barker did not return to the director’s chair, there are a few things that are done even better here. The make-up effects are taken up a notch (40% more maggots!) - though unfortunately at my store, as was the case with many titles, we had the rated version - and giving us a look into the other side was a neat place to take the series, as well. 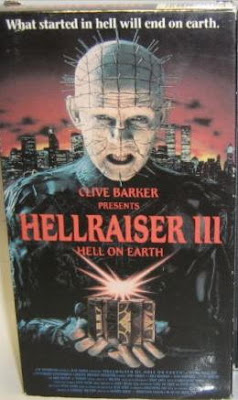 I think I died a little inside when I first saw the scene where the Cenobites are marching down a city street taking on the cops Heat-style. 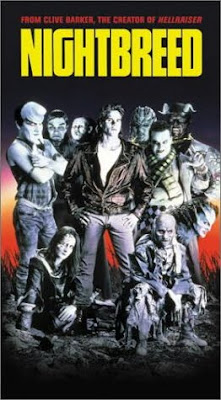 Even though the studio butchered this movie – Barker once said it was because they couldn’t wrap their heads around the fact that the monsters were supposed to be the ‘good guys’ – the creature designs were absolutely spectacular. The same amount of meticulous detail went into each character, whether it be the ones front & center like Peloquin and Kinski or ones we only saw for a second like Otis & Clay. An original cut exists and if you want it released, sign the petition here. 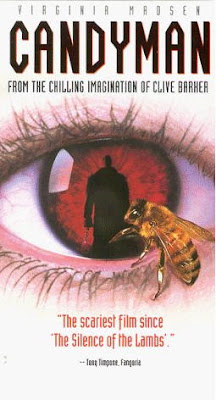 This one could be my favourite. It has a strong story rooted in a timeless urban legend and an even stronger performance by Tony Todd as the title character. I’ve never been able say his name five times in the mirror. Have you? 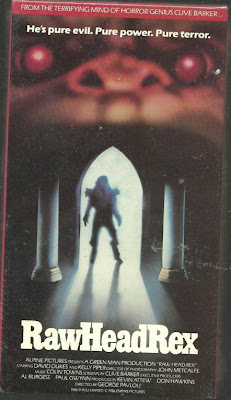 Rex is a lesser-known adaptation from the UK, taken from the story in one of Barker’s Books Of Blood. It involves a demon that is accidentally released from its prison and then wreaks havoc in the Irish countryside. The creature effects are pretty good, as well. This is definitely a title worth tracking down. 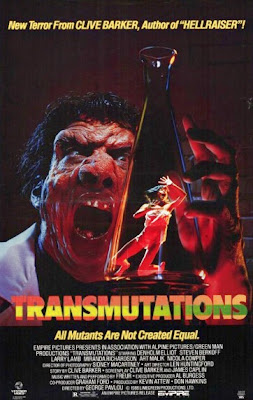 Also known as Underworld, this small British film featuring Denholm Elliot and Miranda Richardson was about a mad doctor who keeps his mutated subjects locked up underground. I saw it a very, very long time ago and can’t even remember if it was any good or not. 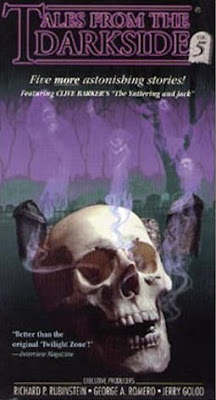 The Books Of Blood story The Yattering and Jack made an appearance in Volume Five of this video series.

Lord Of Illusions and Candyman 2: Farewell To The Flesh came along in 1995, but I had moved on to a different retail hell by that time.

Well that was fun, wasn’t it? Be sure to check back tomorrow as I still have one more Barker-inspired post up my sleeve.
Posted by Jay Clarke at 10:07 AM

I remember seeing the Rawhead Rex and Transmutations cover boxes at my rental stores but never had the guts to actually rent them. They looked so horrible. I've always heard bad things.

However, the Nightbreed comics with Rawhead Rex in them are awesome.

I'm going to have to check out Transmutations. Candyman and Hellraiser are terrific films - both so visually frightening.

We had an old mirror in the garage behind a load of crap we'd chucked out the house. When I was 10 years old or so, me and a friend decided that was our best bet for summoning Candyman. At least then he'd be in the garage and not in the house - funny how kids think. We got to four "Candyman's" and couldn't say it for a fifth time!

Thanks for this! Clive is a favourite artist of mine and such a wonderful guy!