It's a beautiful day outside, so I'm gonna get right to it. Ahhh, who am I kidding? I'll no doubt be hopping right back into Red Dead Redemption as soon as this is done. I wonder if I can lug by bigscreen out onto the back patio...
Dennis Hopper Dead At 74. 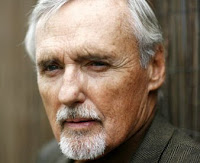 Iconic actor Dennis Hopper died yesterday of cancer. He was a man who wore many hats, including director, producer and writer over his long film career, which started alongside James Dean in A Rebel Without A Cause. In addition to his celebrated roles in Easy Rider - which he also wrote and directed - Apocalypse Now and Blue Velvet, he also starred in several horror flicks, including Land Of The Dead, Witch Hunt and The Texas Chainsaw Massacre 2. Hopper leaves behind a long list of work that will be remembered and enjoyed for countless years to come.
A New Slasher On The Block.

While at Serena's last movie night, I met two people who worked on an upcoming slasher called If A Tree Falls. Here below is the trailer.

Though the market is saturated with road-trip-gone-wrong movies these days, I must admit that the Just Before Dawn vibe I got from the trailer does intrigue me. If A Tree Falls will be playing Fantasia in July, so hopefully I'll be able to catch it there.
Adlard Does Romero.

Below, is the one sheet that Magnet commisioned Charlie Adlard, illustrator for Robert Kirkman's super-awesome comic The Walking Dead, to do for George A. Romero's latest film Survival Of The Dead. 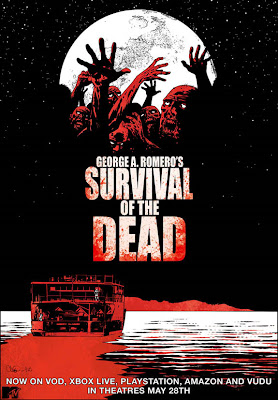 I know this is a few weeks old, but I wanted to wait until the movie was actually in theatres to put it up here. For my review of Survival Of The Dead from last September, click here.
Posted by Jay Clarke at 9:38 AM