You Were So Close!

I finally got around to watching the sequel to The Descent this weekend. 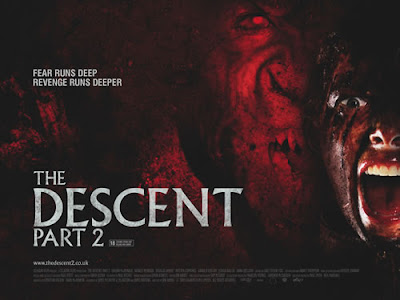 Shortly after Sarah's (Shauna MacDonald) narrow escape, she is brought back by a rescue team to help search for survivors. It doesn't take long before they are once again fighting for their lives against the indiginous population.

Now, I hadn’t been avoiding The Descent Part 2, but I don’t think I was particularly rushing to see it either. After all, Neil Marshall’s 2005 effort was arguably the best horror film in recent memory, so the pessimist in me was entitled to think another attempt at those lofty heights was a fool’s errand. So, imagine my surprise when director Jon Harris and company almost did just that. I say almost because they did pretty much everything right, until the last few moments tragically brought the whole system crashing down on itself. Without those last sixty seconds, these two films would have gone together as deliciously as peanut butter and jam. Enough about that for the moment though; let’s concentrate on this movie’s many strengths.

The thing I actually thought I was going to have a problem with was how the fuck they actually got Sarah to go back into the caves again. I mean, can you imagine asking someone to do that??? It would be like telling Sandy Hardesty she had to go back to that farmhouse after the events of The Texas Chainsaw Massacre. I would imagine her response would be something to the effect of...

But then again, that’s probably what she said to everything after that ordeal. Anyway, The Descent Part 2 skirts this issue by having Sarah conveniently struck with amnesia. Not original, but I was able to suspend my disbelief and move on from that. Once we get down into the caves with our new group of chumps, I mean characters – this one consisting of a trio of pro spelunkers, a sheriff, his deputy and good ol’ Sarah – things go from bad to worse quickly. The sequel offers up the same one-two punch of claustrophobia combined with extreme tension and gore that its predecessor did. Although this time, we see everything from a new angle, as we are now familiar with the space that this new batch of characters are walking around in. It was eerie to see them come across the belongings (and sometimes bodies) of the previous expedition, much like when the SWAT team in [REC]2 came in after the poor saps in [REC]. 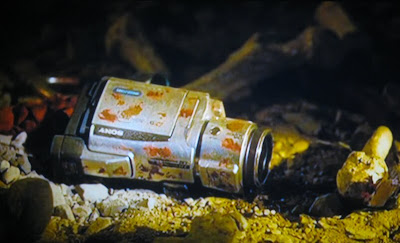 And man, do I really appreciate it these days when filmmakers make practical effects their first priority. It makes me sad that so many productions go the CG route, when it is blatently obvious how much less effective digital blood and guts are up against the real thing. I will admit my connection to the characters in the sequel was a good deal less, mainly due to the fact we don't get all that much time with them before the shit hits the fan. In the original, we got an entire act of the six gals interacting with each other, seeing who was close to who, what they were like and who the leaders were. Here, we barely get their names and serial numbers before they are clamouring around in the dark. I'm not saying I wasn't still invested, as I wouldn't wish these circumstances on anyone, but it just wasn't as powerful as that first glorious go-round. Lastly, I can't not mention this. I'm not one for spoilers (though truth be told it is in the trailer - good thing I didn't watch it!) but I'm going to spill anyway. The moment where Juno (Natalie Mendoza) shows up all cavegirl was like, super awesome... 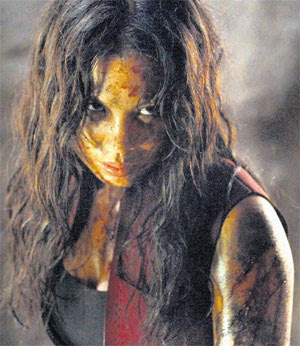 Juno is great, but feral Juno is epic!

I didn't really know what to expect from The Descent Part 2, but it certainly wasn't something as good as this was. They really didn't half-ass it here and that's what makes the film's conclusion all that more frustrating. It goes beyond the fact that I didn't like it; there's a fundamental problem with the end that, when taken in context with its beginning, really messes up everything. If you are one of the many who thought High Tension shit the bed, well, you ain't seen nothing yet. And it literally IS the LAST minute! If you chop that out, you’ve got a freakin’ awesome sequel that perfectly compliments the original. 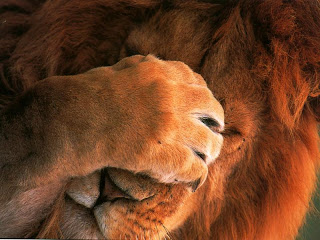 Ahhh well. I hear that Harris, Marshall & Watkins are already working on a third installment, so hopefully they can muck about with it, like they did with the first one. The bottom line is definitely check this one out, as it recaptures a lot of what made the original such a success. Just don't be surprised when you are left shaking your head when the credits roll.
Posted by Jay Clarke at 10:02 AM