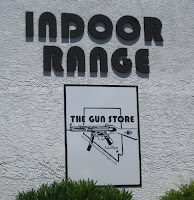 By far, the funnest thing I did in Vegas - well, the funnest PG-rated thing anyway - was take a trip to The Gun Store. I had heard from a few people that going to a range was a must while in Vegas and I was totally up for it. A friend of mine had just been there a few weeks before and told me all about their fantastic 'Zombie Package'. I was stoked. Being from Canada, this whole right-to-bear-arms thing is a little foreign to me. Were they really going to just hand me a gun when I walked in the door? The answer is yes. And they smile while they do it. Albeit while keeping one hand on their own sidearm, in case you decide to go postal.
So, our second day in Vegas, we took a fifteen-dollar cab ride from our hotel room at the MGM and soon found ourselves standing in front of a wall full of guns. 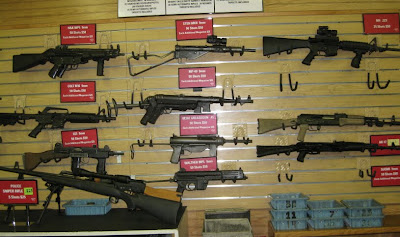 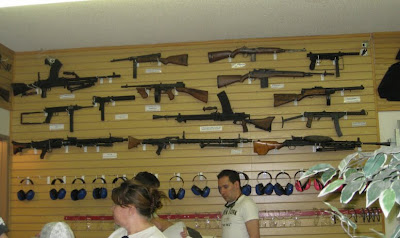 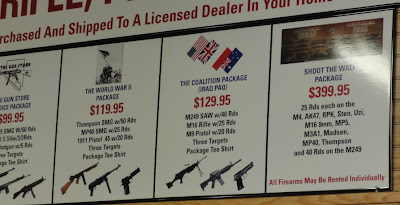 I'm sure the bazookas are just for show, right? RIGHT?

Naturally, I went with the Zombie Package and my friends went with the Coalition Package aka The Iraq Paq. They must seriously make a killing here, as I'm sure ammunition can't be that expensive, especially if buying it in large sums. Considering it was a Wednesday afternoon, it was pretty busy, but after about a half-hour we were standing in the sound-proofed, highly air-conditioned firing booth, with our ammo in hand. 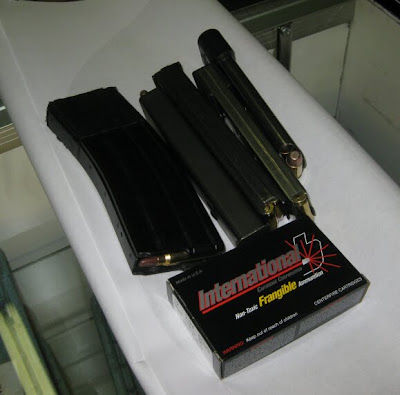 Our instructor Tom was super cool, telling us what to do with each weapon and then stepping back. He had obviously been in the military at some point because he knew every weapon inside out and had many stories of them in action. I was first up with my shotgun. I was fully expecting to get knocked on my ass, but the recoil was not nearly as harsh as I was expecting. Cocking it after every shot really is as satisfying as it looks in the movies. I'm not sure what make of shotgun it was, but after referring to Call of Duty, I'd say it was something similar to the W1200.

Next up, we got to fire off two clips with our handguns. I believe mine was an M9. 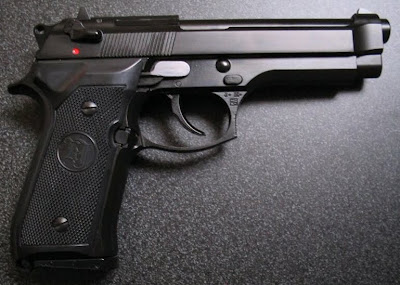 Once, I figured out not to hold down the clip release while cocking it, I was off to the races. Looking at the targets afterwards, my aim was definitely the worst with the pistol and also the one I felt the most uncomfortable with. It seems odd that the smallest weapon would be the hardest to handle.
Then we moved onto the machine guns. I got fifty rounds with an Uzi.

Even with an extra stock to hold onto, it really does start to get up on you if you let off more than five rounds at a time.
After my buddies shot off their M16's, it was time for me to get a hold of an FN Herstal FS2000. It was set to single shot, as due to its extreme rate of fire, full-auto is military use only. For all you MW2 addicts, this is the death dealer that gets unlocked at level 60. This had a laser sight on it, so it made hitting 'Roxie' a little easier. 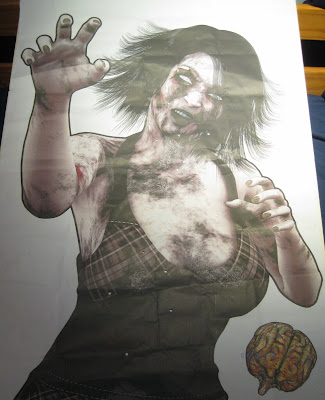 No headshots true, but I certainly separated it from the body, which is almost as good. I put a few shots in the chest, after Tom yelled "go for the silicone!" halfway through my clip.
Our trip to The Gun Store was amazing and worth every cent. I certainly gained a new appreciation for firearms and it was cool to get my hands on the hardware I had been shooting virtually for so many years. A thing I found funny was that every local I mentioned The Gun Store to all said the same thing. "Oh cool, I've never been." It amazes me that with this awesome thing in their backyard, the majority of people that are going there are tourists. Then again, I haven't been to the CN Tower in about twenty years.
There is a small chance I maybe going back to Vegas next year with a different group of people, so you know where I'll be going if that happens. Zombies beware!
Posted by Jay Clarke at 10:01 AM

What else did you get your hands on in Vegas that you had only been handling virtually for so many years...

So awesome. This is going in my news post today. What does the zombie package cost?

Dear Jay. I live in a crummy little town in Alberta. We only have a small independent movie theatre that plays one flick a week, and it's either G-rated fare or a RomCom.

If I want to see the new Nightmare On Elmstreet, I have to drive over two hours to the nearest city to see it in their cineplex.

What should I do?

@Anonymous - If you're looking for me to tell you expend any energy to see the Nightmare remake, you've come to the wrong person haha. As for options, check out zip.ca, I've been using them for over five years.

We used to have a large indoor range here like that in Pittsburgh, but they stopped the full auto shooting due to rising insurance costs.

Also, rate of fire has nothing to do with the legality of weapons for civilian use. Full auto is full auto, if they got a license for an uzi, then they could have gotten the F2000 also...

Hmmm, that's interesting. I was just going by what they told me.