Considering it was released on video this week, I figured it was time to throw out my thoughts on Emil Hyde's The Landlord, a movie that has been in 'the pile' for quite sometime. 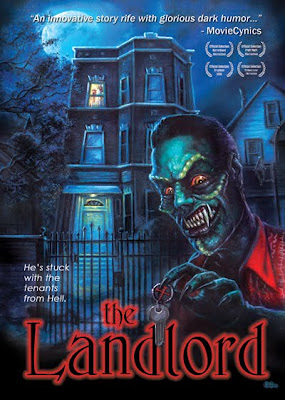 Tyler (Derek Dziak) has a problem. He can't seem to keep the pair of demons that live in his building from eating his tenants. Things get even more complicated when he meets Donna (Erin Myers), a young woman with a secret of her own.
As you'd expect from a production that cost twenty grand, The Landlord looked pretty rough, but damned if there wasn't something inherently watchable about it. What was most important to me was there was an original idea that entertained, so I forgave a lot of its low-budget underpinnings, like obvious ADR and laughable CG. While watching The Landlord, I found myself thinking of Greg Lamberson's 1988 effort Slime City, as I remember having a similar reaction to that, as well. 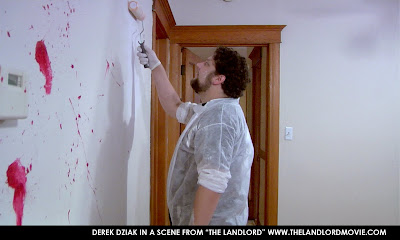 As the movie wore on, I found myself laughing more with The Landlord, than at it. It offers up some pretty funny moments – an almost completely improvised scene in a sleazy motel lobby comes to mind – which is kind of what you want in a horror comedy. The standout characters for me were Det. Lopez, the 'bad' cop played by Kurt Ehrmann and Tyler's sister, Amy, played by Michelle Courvais. 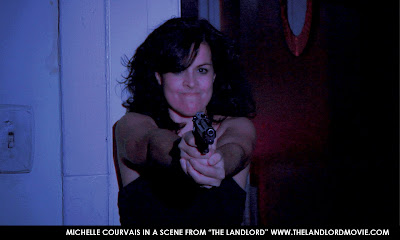 There were some nice special features on the disc, which was a nice bonus. I've worked on a few micro-budget productions and the common thread is the camaraderie that develops between all involved. The behind-the-scenes stuff on The Landlord disc is probably one of the best I've seen that showcases this. The disc also comes with its own drinking game. Genius! Good on Tempe Video for putting this out, as this is definitely one of the better offerings I've seen them distribute.

If you are one of those people who obsess over the bells and whistles, then you should probably look elsewhere, but for those who enjoy grass-roots absurdity in the vein of the aforementioned Slime City, Street Trash and the films of Frank Henenlotter, I would put forth that you give the Landlord a visit.
Posted by Jay Clarke at 11:48 AM