Another One For The Fire.

The ongoing Zombie Month Movie Marathon over at the Inevitable Zombie Apocalypse got me in the mood to watch a zombie flick or two, so here’s one I watched last weekend.

Any horror fan worth his salt knows that in the mid-to-late 2000’s, it was the French that dominated the extreme. Starting with Alex Aja’s High Tension in 2003, we were assaulted with no-nonsense pulse pounders such as Them & Frontiers. By the time Inside rolled around, there was a clear sense of one-upmanship happening within this tightly knit group of directors and horror fans were left wondering what could possibly top Bustillo & Maury’s nihilistic bloodbath. The answer was Pascal Laugier’s Martyrs. It was a film so vile and unapologetic, that it left people feeling as battered and bruised as its protagonist.

So the question again became, what could possibly top THAT? There were several French projects making the rounds at the Cannes film market early that year, but none matured into ‘the next big thing’. It appeared that the French New Wave had finally peaked.*

However, there was one called The Horde that showed promise. 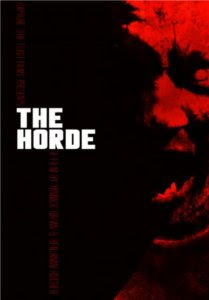 A rogue foursome of cops sneak into a run-down tenement to take out a gang of drug dealers just as the city is hit by a zombie outbreak. In order to survive, the two sides band together in order to fight their way out.

It sounds like a lock, doesn’t it? It’s cops vs. gangsters vs. zombies! What could possibly go wrong? Weeelllll…

I think the prominent problem with The Horde is that the filmmakers just aren’t as skilled as the ones that came before them. High Tension was a brilliant mix of gore, sound design and, well… tension and the first half of Inside is a fucking work of art as far as I’m concerned. I found the editing in The Horde very disjointed and it often seemed like the camera wasn’t where it was supposed to be. It’s fairly unremarkable overall, staying at the same level throughout before ending rather clumsily. All the characters were pretty one-note, as well. Now, in a film like this, I don’t need my zombie-fodder to be multi-dimensional, but I do need them to be distinguishable. The only person who really showed any real colour here was Jo Prestia, and that’s because… well, it’s Jo motherfucking Prestia. Anyone who’s ever seen Irréversible is never going to forget that face. 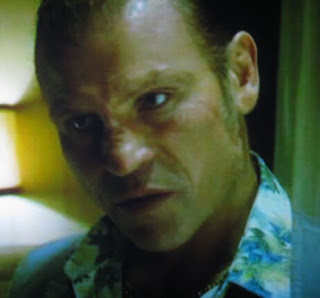 If you see this man on the street, run the other way.

Okay, I’ll give Yves Pignot some credit too. His comic relief as old-timer René was worth a few chuckles. To be fair though, there is still some fun to be had. The thing about zombie flicks is, like slashers, they are a bread & butter genre. There is very little you have to do to make them palatable to people (myself included) who eat this shit up. Characters hole up in a location, the zombies attack, there’s gore-a-plenty and they do or don’t make it out. That being said, I think we should put a moratorium on a few things from now on. First and foremost, I don’t care what universe you’re from; we have all evolved enough as a race to know that to kill a zombie, you shoot it in the head. With Shaun Of The Dead & Zombieland fully penetrating the mainstream, this should be as common knowledge as a wooden stake or silver bullet. I don’t want to see characters wasting their entire arsenal before they figure out - or even worse have to be told – that they have to aim a foot or two higher. Secondly, if you’re bit, you’re dead. Off yourself right away and do everyone a favour. I can be a little more forgiving on this one, because they are always extenuating circumstances, but it’s time to face facts. Losing a loved one is hard, but so is having them rip into your throat as soon as they turn. Do the right thing, people. 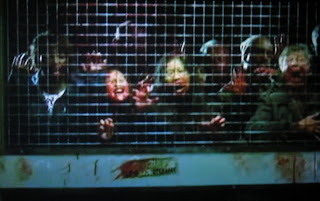 The zombie flicks that persevere are the ones that bring something new to the table and/or raise the bar creatively. Though I liked it, The Horde seemed like a missed opportunity.


*The ‘shocker’ of 2009 turned out to be Antichrist, from Danish director Lars von Trier. This year’s frontrunner is from Serbia. If you haven’t heard about it yet, trust me, you will.
Posted by Jay Clarke at 10:02 AM