I'm up waaaaay too early on a Sunday... here's what I've got for you today.

Here below, is a new vid from Toronto-based videographer Rob Mitchell. This time he sits down with Ken Gord, a man with dozens of production credits to his name, including one of my faves, the giant rat invasion flick Deadly Eyes! I've met him a few times at different events and man, has he got a story or two. Anyway, here it is.

Fangoria reported a few days ago that Glass Eye Pics, the New York based film company headed by Larry Fessenden, has a new project in the works. It's called Tales From Beyond The Pale, a series of half-hour radio chillers in the vein of the ones produced by Orson Welles and others in the thirties and fourties.

If that isn't enough to get you excited, Fessenden and his partner Glenn McQuaid - who worked together on 2008's I Sell The Dead - have gotten an impressive list of contributors, including Ti West (House Of The Devil), Don Coscarelli (Bubba Ho-tep), J.T. Petty (The Burrowers), Doug Buck (Cutting Moments) and Paul Solet (Grace). How cool is this? Click here for the full info. 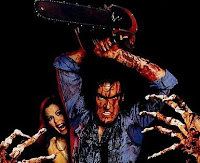 Sara over at starcostumes.com emailed me a cool link the other day. It's The 10 Greatest (and Campiest) B Horror Movies Ever. While it has the old standbys like The Evil Dead and C.H.U.D. - though Peter Jackson's Braindead is conpsicuously absent - it also had a few titles from the path less travelled. Hell, I'd never even heard of The Chooper and Freez'er, until last week. Check it out here.
Posted by Jay Clarke at 9:19 AM