Three Movies In One!

I took a trip into town, via the nearly deserted highway - I swear, for all the trouble this G20 thing has caused, it has sure helped inbound traffic - to check out the Vagrancy screening of Dr. Butcher M.D. at the Toronto Underground. This is another eighties title that only existed previously to me as a memorable coverbox on a crusty video store shelf.
Oh, Dr. Butcher M.D. How adorably ridiculous you are. But I have to ask, where was this movie? 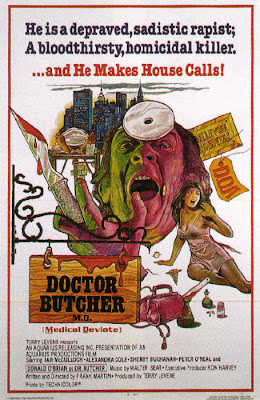 The movie I saw was about random cannibals and zombies on an island. I mean, sure, there's some stuff at the beginning involving some dude mutilating and eating corpses at a hospital, but it takes a reaaaaallly long side route to get back to the "doctoring" at the film's end. Speaking of which, is it just me or is this film last ten minutes of Dr. Butcher exactly like the conclusion Lucio Fulci's Zombie? Ian McCulloch? Check. Lots of fighting inside a burning barn? Check. Our heroes escape before being overwhelmed by zombies/natives? Check. No wonder Dr. Butcher is called Zombie 3 in some circles. It's funny because like I said, it really is like there are three movies going on in here simultaneously. You have this mystery about cadaver mutilations mixed with two knock-offs of Deodato's Cannibal Holocaust and the aforementioned Zombie. The result is not nearly as awesome as you would think, but despite the badness, it is still highly entertaining because you know those Italians always deliver on the gore. 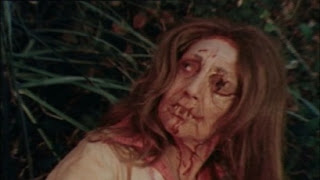 There's an especially memorable bit with someone getting their head sliced into with a motorboat propeller. It's no zombie vs. shark, but I'll take it! There's no shortage of skin, provided by the lovely Alexandra Delli Colli (also of Fulci's New York Ripper) and as with many movies of this ilk, I was bopping along with the score, as well.
If you are into these old Italian B-titles, then you should add this to the roster, if you haven't already. Just don't expect this

1) The depraved doctor in the poster is Salvador Dali. They replaced the paintbrush he was holding in the original photo with a scalpel and added one of those head mirror things, because nothing says "this is a doctor and not a surrealist painter" like one o' them.

2) Medical Deviate is not a degree recognized by any major American professional organization... yet.

3) Not only does the final sequence rip off the ending of Zombie, but it was shot in the same church/barn.

Ahhhh, now it all makes so much sense. Thanks for the info!