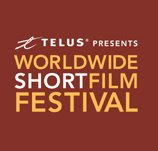 Last Friday at the witching hour, I took in some horror shorts, as part of the Worldwide Short Film Festival. I was glad to get out for this year's "Creepy" programme, as last year I was occupied with Snip, my 2009 Film Race short.
Coincidentally, there were two shorts in the programme this year that were made as part of the Bloodshots 48-hour film challenge. The first was one was called Jack, which was entertaining, but I think it would have enjoyed it more, had I not already seen Jason Eisner's Treevenge. The second Bloodshots entry was called Chloe & Attie. I loved the look and sound design of this piece. It took the majority of its eight minutes to get going, but it hooked me by the end. Here's the trailer.

I really liked Peter Hatch's 5 Minute Dating, which was about a disfigured man who goes speed dating. The makeup effects were top notch and had a solid finish. I wonder if the writer of this short had a bad dating experience once and this is how he exorcised his demons.
The two animated shorts in the programme were among the strongest. The first was Mrdrchain from the Czech republic. The guide says it best when it describes it as "slice 'n dice animation". I love abstract stuff like this and it certainly didn't skimp on wonderfully grotesque imagery. It had a happy ending though... I think. The other one was a UK stop-motion animation curiosity called Battenberg. It's safe to say I loved this one. There's something about this style I've always dug, ever since I saw Jan Svankmeyer's Alice as a teen. Below, is a short clip for Mrdrchain, followed underneath by the trailer for Battenberg.


My favourite short of the night was likely Jonathan Van Tulleken's Off Season though. A simple story about a man and his dog robbing cottages during the winter gets creepy quickly. This one was pretty awesome and the only short that eve that actually got a physical reaction out of me. To check out of a clip of Off Season, click on the image below. 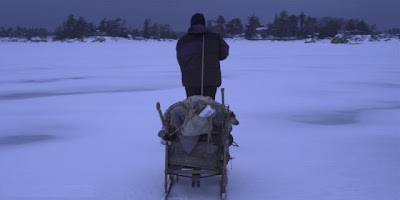 So, keep your eyes out for them! For more info on the WSFF's Creepy programme, click here.
Posted by Jay Clarke at 10:04 AM