You know, you gotta love Toronto if you're a movie fan. Or more importantly, a b-movie fan. Over the past few years, several rep theatres and clubs have sprouted up to cater to the esoteric. The giant multiplexes with their IMAX and 3-D are all good and well, but I would like to see a 35mm print of The Texas Chainsaw Massacre 2 or Brian De Palma's Sisters, just as much. Coexistence is possible, and my fair city is taking great strides to prove it. The reason I bring it is up is that another such institution has arrived on the scene. In addition to the Trash Palace, The Toronto Underground and one I can't speak of without having to kill you, comes VHS Theatre. As midnight approached on Wednesday night, DirtyRobot and I joined about half-dozen other souls at The Comedy Bar on Bloor, to revel in the incredible awfulness of Don Dohler's 1982 alien-run-amok flick Nightbeast. 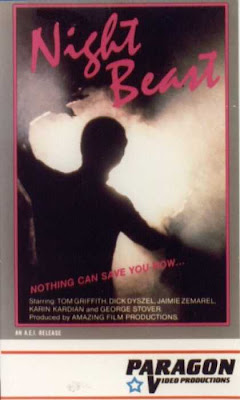 The brainchild of Toronto film aficionado Bub Logan, VHS Theatre came about when he just decided to step up and give the format that was once king some love. 35mm is awesome, but let's face it, a VCR is a hell of a lot easier to acquire and operate. And that is exactly what sets VHS Theatre apart. Yes, we were actually watching said movie on video tape, distorted sound and tracking lines intact. Oh, it warms the cockles of my heart just thinking about it. I wish I could better articulate what makes these old crusty titles so enjoyable to watch, despite their overwhelming flaws. Perhaps after you watch the trailer below, you will get the gist.

This screening of Nightbeast was a test run, but there's already another queued up. Next Wednesday night ushers in a viewing of Antonio Margheriti's Ark Of The Sun God, which Bub described as a cross between Rambo and Raiders. Umm, yes please!
With Suspect & Eyesore pitching in, Bub has a never-ending supply of titles he could showcase, but I aim to let him know he has any of these goodies at his disposal, as well. 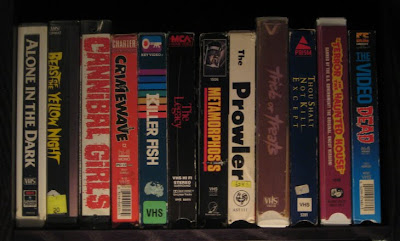 I'm liking the way this summer is looking, folks.
Posted by Jay Clarke at 10:09 AM