As I mentioned in my last DKTM post, the TIFF Lightbox started up its Best of Midnight Madness programme last Saturday. The inaugural screening was Frank Henenlotter’s 1988 flick Brain Damage. You may be surprised to learn this, but up until recently I’d never seen any of his movies. I was familiar with the titles of course; having passed by their colourful covers for years, but never partook for some reason. I eventually saw Frankenhooker at one of Serena’s movie nights, and Schwartz – a ‘Lotter super fan – initiated me into the world of Basket Case shortly thereafter.
I have no explanation as to why I hadn’t previously seen Brain Damage, but in my defence, I wasn’t alone. It was surprising how many people in attendance on Saturday were seeing it for the first time. 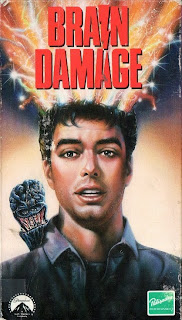 Brian (Rick Hearst) has found the perfect drug; the juice dispensed by a parasite that has set up shop on his body. The only snag is having to constantly feed it human brains.
Naturally, I thought Brain Damage was a blast. It is just one of those movies that makes you grin from ear-to-ear because it is equal parts fucked up and fun. Henenlotter’s oeuvre shares a lot of the same qualities as the stuff released by Troma around that time, but his stuff seems not only more significant somehow, but also more legitimate. It must have something to do with its timelessness, as some genre flicks are tied to their era and have a distinct ‘you had to be there’ vibe. However, Brain Damage is enjoyable whether you’re like Schwartz, who watched it over and over again on a tiny TV, or, DirtyRobot & I, seeing it in a state-of-the-art theatre in 2011. 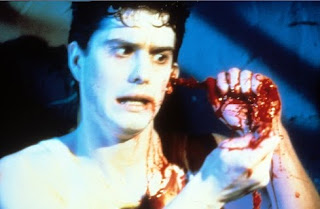 It could also be that Henenlotter did a lot, with very little. The gore, provided by splatter vet Gabe Bartalos, is top notch and the trippy visuals stand out immediately. I would recommend to anyone who dabbles in illegal substances to put this on a to-watch list. You’re getting brain damaged anyway, right? The movie also employs some animation techniques that, like Basket Case, give it a unique feel. The real highlight of the movie though, and this shouldn’t be news to anyone who has seen it, is Aylmer, Brian’s slimy symbiant. It is shocking how little time it takes for you to accept there is a talking parasite onscreen. Imagine Basket Case’s Belial, but with a penchant for belting out show tunes. And just when you thought it couldn't get any more random, we're treated to a hilarious exposition speech from one of Brian’s neighbours.

Frank Henenlotter is truly a one-of-a-kind filmmaker, and Brain Damage could very well be his crown jewel.
Posted by Jay Clarke at 12:44 PM

I think that hilariously long exposition speech is the highlight of the movie.