Guess Who's Coming To Dinner?

I've been having a blast here at Midnight these past few nights. After kicking things off with the bone-crunching awesomeness of Gareth Evans' The Raid and the Bobcat Goldthwait's entertaining hate-letter to modern culture God Bless America, it was finally time to for some down-and-dirty horror.
On Saturday night, The Ryerson was buzzing for Adam Wingard's latest You're Next. The industry word of mouth and a cool marketing campaign, which included street grafitti and promotional masks, caused this to be a hot ticket indeed. There were several genre directors in attendance, from the aforementioned Evans to Guillermo Del Toro, Darren Bousman and midnight alumni Alexandre Bustillo & Julien Maury - whose new film Livid played the following night.

A strained family reunion in the country is crashed by three masked assailants.
I enjoyed You're Next immensely. The home invasion flick has been done many times before, but this felt very fresh to me. I've praised Simon Barrett's writing before and he's tip top here, with crisp dialogue that had just the right amount of laughs. It was a nice break from the dour affairs these things usually are. Like Midnight programmer Colin Geddes stated during the Q&A;
“Every year, I get submissions that are just a person tied to a chair being tortured and humiliated.”
Barrett also upped the ante here, by using a large number of characters, as this could've easily been a fairly insular piece along the lines of similar-looking The Strangers. He sets up them like bowling pins and the animal-masked antagonists quickly go about knocking them down in increasingly gruesome ways. I've previously stated that I'm not a big fan of Wingard's directing style, but I had absolutely no problems with it here. Wingard came right out and said afterwards that he deliberately set out to make “a normal film” which would explain things.

Director Wingard (left), Writer/Producer Barrett & actors Rob Moran, Margaret Laney, Barbara Crampton (yes, that Barbara Crampton!) Wendy Glenn & Sharni Vinson.
What I found most astonishing about You're Next was how quickly it was thrown together. It was born out of a desire to do a “midnight movie” after Wingard & Barrett – here screening A Horrible Way To Die last year at TIFF - walked out of the Insidious premiere. To have something of such high quality ready within a year, is pretty impressive. It speaks not only of how well these guys work together, but how many good relationships they've been able to establish, as You're Next also features appearances by indie darlings Ti West, Larry Fessenden and Joe Swanberg. When you've got those guys in your corner, I can imagine you would tend to breathe a little easier.
You're Next is also complimented by a great score, high-lighted with some Carpenter-inspired synth. But I think my favourite part about You're Next was its lead actress, Sharni Vinson as Erin. She made a fantastic Final Girl. Like, one for the ages. The crowd really got behind her, when they saw her taking charge of the situation, instead of just screaming and cowering in a corner. 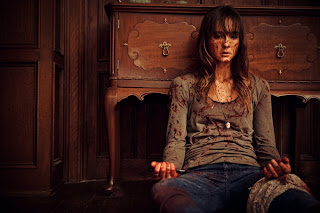 Wingard & company set out to make the perfect midnight movie, and they have essentially done just that. It had tension, great old-school gore and was, most importantly, a shit-ton of fun.
Posted by Jay Clarke at 10:32 AM

A very fun flick, even if it isn't all that scary. But hey, that's fine with me, just as long as I'm entertained enough to get past it. Good review Jay.