All February, I will be saluting those of the fairer sex who have contributed to this dark genre during their careers. I will begin with actress Adrienne Barbeau.
I had an early affection for Ms. Barbeau as she starred in many of the horror films I devoured as a child, including The Fog, Swamp Thing and Creepshow. She has a very strong presence, which is likely why she rarely played a victim, even when circumstances seemed like she could have. 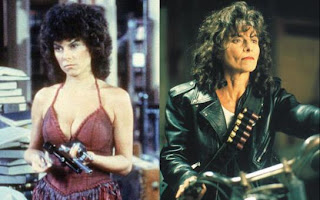 Barbeau as Maggie in 1980's Escape From New York (left) & as Christine in 2000's The Convent.
She has had a long and stable career, also working regularly in televison with appearances on shows such as Dexter, CSI:NY and was a regular on one of my favourite shows of all time, Carnivàle. Recently, she has also branched out into video game voice over work, lending her distinctive voice to Batman: Arkham Asylum and God of War III. Although, I guess this would be a callback of sorts, after her stint voicing Kurt Russell's “cheatin' bitch” chess program in John Carpenter's The Thing. I wonder if she's the first actor to ever voice a video game?
After eight years attending the Festival of Fear, I've gotten to see several genre figures up close & personal, and fortunately in 2007, Barbeau was among them. She was absolutely lovely and humbled that people enjoy her work. She even gave a shout-out to Cannibal Women in the Avocado Jungle of Death during her Q&A! Ah-mazing.
In 2006, she released her memoir entitled “There Are Worse Things I Could Do.” Here's to you, Ms. Barbeau!
Posted by Jay Clarke at 10:00 AM

She was at HorrorHound Weekend one year that I was there. I didn't get to actually meet her since the line was always long, but I did see her as I would pass by. She is supposed to be there again in March, but I haven't decided yet if I will be going.

Nice write-up! She's a goddess and always will be. I'm doing the Women in Horror Month thing as well, starting today with Sally Hardesty of TCM fame. I'll be playing the posts by ear, but I just might have to work one in for an Adrienne Barbeau character. The hard part will be deciding which one...