I revered many Scream Queens when I was a kid, but there's only one that I feel I kind of grew up with. That certain gal would, of course, be Danielle Harris. I was fourteen when my brother took me to see Halloween 4 in the theater. That was the first time that someone around my age – save I suppose to a degree Tommy & Lindsay from the original – was in Michael's crosshairs, and it struck a chord with me.
After the two Halloween films, Harris started popping up in many significant nineties flicks like The Last Boy Scout and Marked For Death. I must admit she fell off my radar – though still very active in television, including a recurring role on Roseanne – until her decidedly much more “grown up” role in Urban Legend. Harris also has a lot of voice work on her résumé, including roles in Father of the Pride, Rugrats & The Wild Thornberrys. 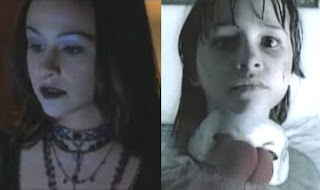 Harris as Tosh in Urban Legend (left) & as Jamie Lloyd in Halloween 5.
In 2007, she returned to the Halloween franchise to play Annie Brackett in Rob Zombie's redux. I may have my issues with the movie, but Harris was the best of the new babysitter trio by a wide margin. More recently, she appeared in Jim Mickle's Stake Land, and Hatchet II. I think what most impresses me about Ms. Harris is that she doesn't let her diminutive size stop her from doing physical roles. It's like she said during her Q&A at last year's Festival of Fear;
“I love doing horror... If I’m not bruised, losing my voice from screaming and covered in blood, I don’t really feel like I’ve earned my pay.”
Nowadays, Harris is still keeping busy with half-a-dozen projects in the can, including her feature directorial debut Among Friends.
Posted by Jay Clarke at 10:08 AM