I’m going to take this thing up a few notches today, because hey, it’s Friday! Perhaps the most recognizable female icon of the genre – hell, any genre in any form of entertainment – is Elvira aka Cassandra Peterson.
Long before Peterson adopted the persona we all know and love, she was a veritable Jill-of-all-trades. Starting off her career as a showgirl in Las Vegas, she parlayed that into a few minor acting roles. In the 1970’s, she sang in an Italian rock band and was a member of the famous Los Angeles comedy troupe, The Groundlings. 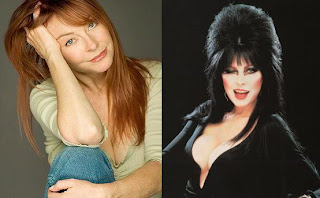 Peterson as Elvira: Mistress of the Dark (right)

In 1981, Ms. Peterson landed the job succeeding the late Larry Vincent on the popular Los Angeles television show Fright Night. Her and a friend then came up with the eye-catching Elvira character and the show was renamed Movie Macabre. The rest is history. Here in Canada, it was syndicated in the early nineties, and I can’t count the number of Saturday nights (or more aptly Sunday mornings) I spent watching. I fell in love with her self-deprecating demeanor, and how she’d playfully lampoon the cheesy movies she was presenting. Her humour was wry, filled with puns and double-entendres. It was titillating (how’s that?) yet light hearted, so it was never too risqué.
As the years went on, Elvira became so pervasive; she became a brand, her image plastered on everything from calendars to comics, perfume to pinball machines. Way back, I did an archives post on her board game! I’ve been lucky enough to see Ms. Peterson twice here in Toronto. The first time was at 2005’s Festival of Fear, and the second in character as Elvira just last year. She was delightful both times, bursting (oh, there’s another one!) with charm and wit.
In 2010, Movie Macabre returned to the airwaves for another twenty episodes. Seemingly ageless, Ms. Peterson continues to do regular appearances around the world.
Posted by Jay Clarke at 10:00 AM