If you’ll indulge some flag-waving today, I’d like to say a few words about The Soska Sisters. Hailing from Vancouver, these twisted twins fully embody the spirit of independent filmmaking, wearing many hats including writing, directing, producing, acting and even doing their own stunt work.
Jen & Sylvia Soska gravitated toward the macabre at a very early age and found an outlet absorbing all the horror & exploitation films they could get their hands on. It didn’t take long before they began constructing their own nightmares. Using lessons learned from Robert Rodriguez’s book Rebel Without A Crew – and coincidentally echoing the advice offered by Amy Holden Jones at last Thursday’s Slumber Party Massacre screening – they just went out and did it. Whenever a job needed to be filled; they stepped in. 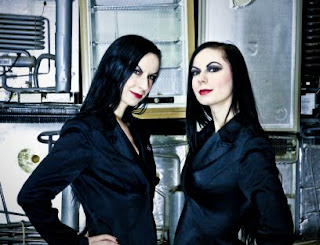 Twisted Twins Jen & Sylvia Soska.
After filming a well-received faux trailer inspired by Grindhouse in 2007, they set out to make a feature length version. Their debut, Dead Hooker In A Trunk was made for almost no money, and after a successful genre festival run was picked up by IFC. Their movie contains no shortage of dark humour and a brutality that I think the Soskas may have enjoyed shooting just a little too much. It’s no wonder the film caught the eye of Eli Roth.
The Soskas are now currently working on their new feature American Mary starring fellow Canadian Katherine Isabelle. It seems fitting that these three found each other, as I envision the Soska’s childhood being similar to that of the Fitzgerald sisters. Minus the lycanthropy, of course.
Posted by Jay Clarke at 10:08 AM