This week, I'd like to concentrate on Scream Queens. I'll start with the most obvious choice; Linnea Quigley. Working in the movie business for five decades now, she has become of the one of the most prolific and recognizable female figures in horror.
However, it is not only the sheer amount of work she has done (over a hundred titles), but also how prevalent she was in the VHS era. With appearances in titles like Silent Night Deadly Night, Graduation Day, Night of the Demons and Creepozoids, it would have been almost impossible to be a horror fan growing up in the eighties and NOT see something she was in. Ms. Quigley's most famous role would likely have to be Trash, the “unshy” punk rocker-turned-zombie in Return of the Living Dead. 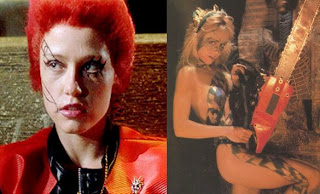 Quigley as Trash in RotLD (left) & as Samantha in Hollywood Chainsaw Hookers.
I have been fortunate enough to meet her twice in my life. The first time was in Toronto's only Fangoria Weekend of Horrors in 1991, and then last year in London, Ontario's inaugural Shock Stock celebration. She was pretty surprised when I told her that and laughed when as I was leaving, said “See ya in another twenty years.”
More recently, she appeared in the documentary Screaming In High Heels with fellow Scream Queens Michelle Bauer and Brinke Stevens, about the rise and fall of eighties horror. Quigley is also heavily involved with PETA.
Here below, is some video courtesy of Mike Schwartz (of Cartoon & Horror) from the Linnea Quigley Q&A last April at Shock Stock.

Isn't she just the best? ;) I just did a post on this lovely lady as well. It seems she is the best choice when tackling the subject of women in horror. I have yet to see another lady with such accomplishments in the field. She's unstoppable. Nice post!

OT - unless you're about to post on the Woman In Black - but I thought you'd want to see your doppelganger, Wizard:

Yeah Anon, 'cept I don't get nearly as many chicks.