The Woman In Black.

It seems fitting that during Women In Horror Month I would get to review The Woman In Black. 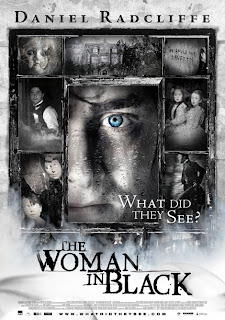 A lawyer (Daniel Radcliffe) is sent to a small village in the English countryside and soon discovers a ghost is terrorizing its citizens.
The Woman In Black is the newest, and most mainstream yet, of the Hammer Films revival. It shares many of the retro leanings that their 2011 release Wake Wood possessed, including ultimately falling short of being as good as the films it emulates. Unlike Wake Wood though, which was of solely British influence, The Woman In Black is a little more global in the films it pulls from. I saw definite parallels to ghost stories from Spain and Thailand, specifically The Orphanage and The Eye, respectively.
It may also be that my lack of fervor is due to seeing The Innkeepers again just the day before. They are similar in some ways, but I think Ti West’s picture has a lot more to offer. I wonder if Radcliffe had had another person to play off for that large chunk in the middle, it would have been more engaging for me. Speaking of Radcliffe, having never been swept up in the whole Harry Potter thing, this was my first opportunity to see him on the big screen. I’d say he was fine, though I don’t think this was a particularly challenging role for him. I would imagine holding candles aloft while scurrying down dark corridors and reading through moldy letters would be old hat for him by now. 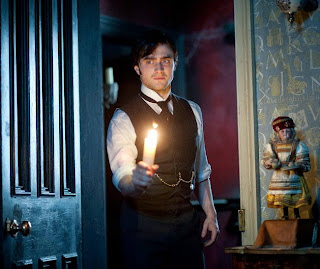 He certainly has the look of a classic Hammer protagonist nailed though. As for the supporting players, I was very happy to see Ciarán Hinds show up in this. If you haven’t seen 2009’s The Eclipse, I suggest you seek it out, because that is a ghost story that really transcends.
I've just noticed that this review is basically me just rhyming off better ghost stories, so I should point out that The Woman In Black is a perfectly competent film. It starts off a little bland, but after a particular scene involving a rocking chair, it gets a lot stronger from there onwards. The production design and look of the movie is top notch and James Watkins was a near perfect choice to direct. He already had experience dealing with characters confined to creepy houses in his debut My Little Eye, and unruly townsfolk in 2008’s Eden Lake. 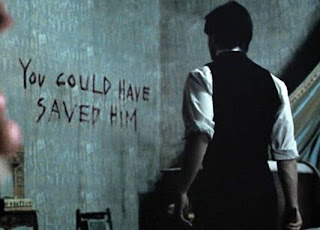 The Woman In Black is overall fairly standard fare, with a few standout sequences. It does what it does well, but don't expect any new tricks from this old girl.
Posted by Jay Clarke at 10:03 AM