The closing night gala of this year's Toronto After Dark was the Spanish horror comedy Game of Werewolves. 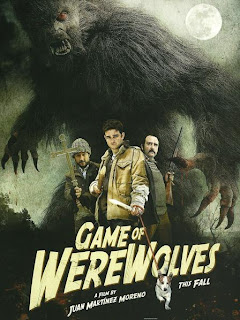 Tomas (Gorka Oxtoa) seeks solace by returning to the village of his childhood, but soon finds himself on the run from the townsfolk who think his sacrifice will free them from a hundred-year-old gypsy curse.

Going in, I wasn't sure what to make of this movie with its jokey title, but it turned out to be a pretty decent movie. I guess I shouldn't be shocked, as I thinking back I don't think I've ever been disappointed by a Spanish genre film. These guys are a talented bunch and just make great movies.

All the ingredients for a successful horror comedy are here. The head trio of the piece Tomas, Calisto and Mario (Oxtoa, Carlos Areces & Secun de la Rosa, respectively) are all great with impeccable comedic timing, but the scene stealer is Tomas' Jack Russell terrier, Vito. It really is true that this breed make the best actors. Director Juan Martinez Moreno wears his eighties film influences on his sleeve, but it never feels like he is merely aping. The comedic beats are handled really well and the result is a lot of laugh-out-loud moments.

As you can imagine, the real highlight of the movie are the werewolves. The makeup effects are top notch, and frankly some of the best I have seen in quite some time. And to top it all off, we not only get quality, but also quantity. My hat goes off to Moreno for insisting on going practical with his creatures, it made the movie ten times what it could've been.

So, the curtain comes down on another Toronto After Dark Film Festival. The crowds were good and all the filmmakers that came out seemed to have a really good time. I think TAD is building momentum in terms of recognition from filmmakers. While it may not have the most pull in the “buying and selling” side of things – though the Soskas' American Mary did ink a deal with Anchor Bay the evening of their premiere – I get the sense that genre directors really like to play here.

Anyway, I'll be back in the next few days with a Shorts rundown and a post on the official TAD awards, so stay tuned.
Posted by Jay Clarke at 10:00 AM

This was supposed to be at a convention I went to a couple of months back. They had a screening set up for it, but the DVD that the director sent didn't work for whatever reason. They promised to screen it at another upcoming conventions, so hopefully I will be able to watch it soon.

Aww that's too bad, it is a good film to watch with an audience.