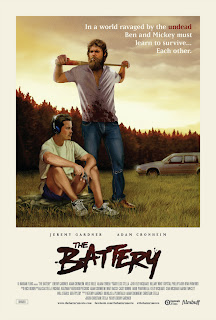 Remember yesterday when I said that Frankenstein's Army was top-tier low budget zombie fare? Well, I misspoke; THIS is the top-tier.

Aside from the obvious achievement that a crew of five could shoot this in two weeks on a culled together budget of six grand, Gardner has actually fashioned something not only coherent, but inherently watchable. I say this because The Battery is billed as a zombie movie, yet the undead rarely appear throughout its hundred-minute running time. This would usually be a detriment, but what you get instead is actually far more impressive.

This is more of a buddy comedy with two dudes aimlessly left to their own devices in a desolate world. The filmmaking is minimalist, yet still extremely competent, so as not to distract from the important part of the film, the strained relationship between Ben & Mickey. They are civil to each other, often even friendly, but they are clearly different people. Ben completely embraces the way things have become, while Mickey clings to the old world, often burying himself in the headphones of his old Discman – which was also a perfect way to usher in the wonderful mix of indie tunes that permeate the film. It really made the numerous montages not only enjoyable, but also seem necessary.

The meat of The Battery though, were the long sections of dialogue between the pair of survivors. These conversations were so naturally delivered, I wager they must've been largely unscripted. There was a pace to the movie that just felt right. In fact, I was having so much fun watching these guys fart around the countryside that when the conflict finally presented itself toward the end, it was almost unwelcome. When the film finally concluded, I was left hoping that someday Gardner and company might return to this universe once again.

The Battery is an inspiring little indie that stands on the shoulders of the pre-packaged chaff that currently dominates the market. I'm all for pomp and circumstance, but The Battery reminded me that there has to be a human element, or its charge will fade almost immediately.

*Q&A photo courtesy of DirtyRobot.
Posted by Jay Clarke at 10:00 AM