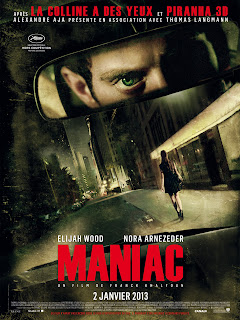 Frank (Elijah Wood) restores antiques by day and stalks the streets in search of female victims by night.

Aja has had prior success with horror remakes – with The Hills Have Eyes & Piranha 3D – and I'd say his record remains intact with Maniac, as well. Although this has a slicker presentation, I feel director Khalfoun still maintains a lot of the sleaze from Lustig's original. This isn't an empty Platinum makeover, folks. Maniac can get pretty ugly when it revels in the violence and because it is told almost exclusively in the first-person perspective, the voyeuristic nature of the narrative makes it even more disturbing. I can't say I'll soon forget the pre-title card segment where things end badly for Toronto's own New Waterford Girl Liane Balaban.

The original is chiefly remembered for its gore effects by Tom Savini, and this one follows suit. I don't know what it is about Aja and his team, but they seem to be able to get the best out of KNB EFX when it comes to practical & digitial integration. I think the best thing about this movie though, is the fantastic score by Rob Coudert. I find it impossible to listen to this now without thinking of Elijah Wood prowling around in a windowless van.


Speaking of which, I really have to respect Wood for taking this part. This is an actor who fronted three of the top grossing films of all time, and now he's running around LA scalping women. This is the kind of role that could kill a career, yet he gives it one-hundred percent. I give you mad props, dude. I think Joe Spinnell would be proud. I also appreciated that the relationship – such as it was – between Frank and Anna (Nora Arnezeder) was left intact. That was one of the things that made the original interesting in that, unlike most onscreen serial killers, Frank was capable of acting like a normal human being.

I feel the movie does falter toward the end, as the amount of stuff that Frank gets away with seems a bit unlikely. I can believe a subway station to be deserted at night, but not a city street in broad daylight. However, since we are seeing things through the eyes of an insane person, it's possible events are not unfolding quite as they appear. It wouldn't be the first time.

Maniac is not a perfect film by any stretch, but I think this crew have a good handle on what makes a good remake. Tell the same story in a new way. Sounds simple, doesn't it? Well, there's a bargain bin at your nearest Wal-Mart that proves that isn't the case.
Posted by Jay Clarke at 10:00 AM