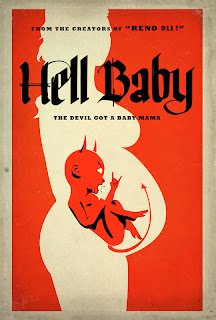 After Jack (Rob Corddry) and his pregnant wife Vanessa (Leslie Bibb) move into a haunted house in New Orleans, she begins exhibiting signs that her unborn child may be the spawn of Satan.

Hell Baby was a pretty hit and miss horror comedy. For every joke that landed, there were two that either went on way too long, or were constantly repeated with diminishing returns. The main draw for me, apart from Leslie Bibb – who seems to get hotter every time I see her – was that it featured a few people involved with one of my favourite television comedies, The League. Unfortunately, Hell Baby is more like Reno 911, than anything as snappy and clever as that.

Essentially, this movie felt stretched out. Aside from all the easy jokes, there were some legitimately clever genre deconstructions and elements that I certainly appreciated, like the decent creature effects and the sizable nude scene courtesy of Riki Lindhome that popped up right when I had begun to lose interest, but not enough to truly sustain itself.

Hell Baby is made up of three pairs, the main one being the parents-to-be Corddry and Bibb. Fortunately, they were the most consistent, but could only carry the movie so far. The other two were Rob Huebel & Paul Scheer as two witless cops, and Robert Ben Garant & Thomas Lennon (who also co-directed the flick) as Vatican priests. Though they both had some funny scenes, the majority tended to drag on and overall, neither were used to their full potential. Personally, I think the highlight of the movie was Keegan Michael Key as the freeloading neighbour F'Resnel, as he was the most consistently amusing of the bunch.

Hell Baby was, save for a few almost arbitrary gross out gags, fairly inoffensive fare that felt too ramshackle to be anything more than a quick diversion.
Posted by Jay Clarke at 1:37 PM