I've had some good luck this year tracking down titles on my wish list. First, Bio Slime finally received a DVD release from Media Blasters and then the Spanish thriller Blind Alley popped up on Netflix a short time after. Now, to complete the trifecta, Fantasia screened Frankenstein's Army last week and you can be damn sure I had a seat. 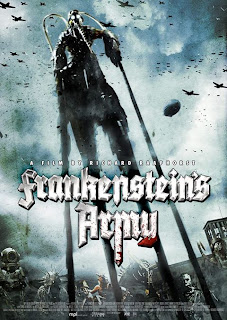 While filming a war propaganda film, a platoon of Russian soldiers fall upon a regiment of reanimated Nazis created by a mad scientist.

As you know, the road to this release for filmmaker Richard Raaphorst was excruciatingly long. His initial project Worst Case Scenario drew much interest after his promo footage lit up the Internet in 2006, but after several years of false starts, it was ultimately abandoned. Several years later, it eventually evolved into its current incarnation called Frankenstein's Army.

So, was it worth the wait? Well, I want to lead more toward yes. My main concern was if Raaphorst and his crew were actually going to deliver on the promise teased so many years ago. I'm glad to say those expectations were not only met, but exceeded. The creature designs in Frankenstein's Army were exceptional, providing quality and quantity, as it featured at least a dozen distinct undead abominations. If these guys ever need a job doing effects - oh, like say, the Wolfenstein movie adaptation for instance - all they'd need to do is walk into the interview with some of this stuff and they'd be hired on the spot. 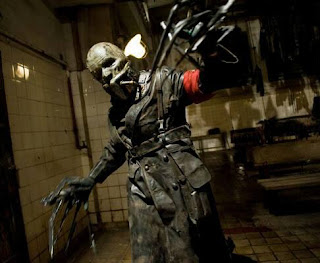 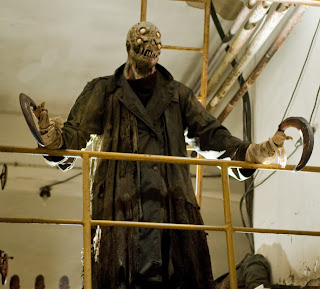 There was also a level of authenticity, as well. It felt like nineteen-fourties Eastern Europe, and the constant pausing for film mag changes – as was the case with the equipment of the time – was a nice touch. This was some dark and demented stuff.

However, I am afraid I cannot lie to you. Everything else about Frankenstein's Army apart from the technical is pretty rough. The found footage format didn't feel particularly necessary, the story was lacklustre and the characters were fairly one-note. Things were good enough to move the narrative forward, but nothing more. Fortunately, Raaphorst was very smart to space out his monsters fairly evenly, instead of cramming them all into the back end, so I was never bored.

Frankenstein's Army was kind of exactly what I was expecting, so I wasn't disappointed. As far as low-budget zombie flicks go, this is top-tier stuff. It may be ultimately empty, but I feel Raaphorst's almost ten-year-old vision remained intact. And he now has a warehouse full of spectacular toys to show off, as well. I look forward to seeing where he and his minions go from here.
Posted by Jay Clarke at 10:00 AM

Richard Raaphorst is Dutch not Norwegian.

And it's not a zombie movie.

Well, I can't really call you a troll when you're right about Roden. My bad. Thx for the heads up.