Director Adam Green made a big bloody splash on the horror scene last year with his splatter flick Hatchet. At a Toronto screening, I remember Green mentioning that his friend Joe Lynch was also a director and we should all keep our eyes peeled for his debut Wrong Turn 2. The movie then came out last Halloween and I only just recently finally got around to checking it out. 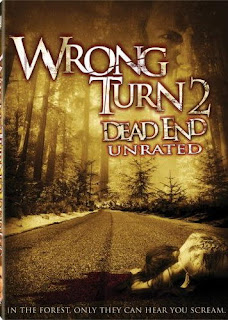 Contestants on a Survivor-like reality television show are set upon by the murderous inbred family of cannibals from the first film.

I was a fan of the original Wrong Turn, but considering this was a straight-to-DVD release, my expectations weren’t too high. However, I’ve got to tell you that I got a huge kick out of Wrong Turn 2. I can see why director Joe Lynch and Hatchet’s Adam Green are friends, they seem to both share the same brain. Honestly, if you were a fan of Hatchet, Wrong Turn 2 is required viewing. You can see that Lynch wears his influences on his sleeve and is clearly a student of Sam Raimi and Tobe Hooper. The highlight of this movie are the extremely creative kills. They may not be as brutal as Hatchet, but Wrong Turn 2 certainly trumps in terms of ingenuity. There are sequences in this movie that I guarantee that you have never seen before. Aside from one obvious CG shot, all the effects are done practically and beautifully at that. 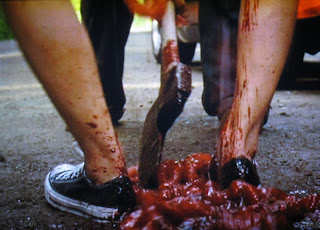 I think what most surprised me was that the movie actually gave me some characters I could root for. Even when putting aside the surprising way the story played around with hardened horror stereotypes, Wrong Turn 2 had me pretty much the whole way through. Sure, the dialogue is largely hit and miss, but I found it bearable because the actors were good enough to power through it. Familiar faces Henry Rollins and Erika Leerhsen appear and for her – after Blair Witch 2 & the Texas remake – Wrong Turn 2 is a step up in my opinion. Another little realization I had was that Hatchet and Wrong Turn 2 share another connection. Duelling Jasons! The bone crushing villain of Hatchet was Kane Hodder (F13 7-10) and the family patriarch in WT2 is Ken Kirzinger (FvsJ). Coincidence?
As Hatchet emulated the old school horror of the eighties, Wrong Turn 2 does a great job of recreating the excessive slasher sequels of that same era. This is a straight up gore flick and if that is your bag, then be sure to check it out.
Posted by Jay Clarke at 7:50 AM

Sigh, I love this movie.

Erica Leerhsen was great in her role and the gore was awesome!

PS: Just discovered your blog, it looks fun and I like the coverbox wednesday feature.