Director Christopher Nolan is one of Hollywood’s brightest stars. This year, his gargantuan Dark Knight challenged for the number one spot for all-time grossing film currently held by the unsinkable Titanic. The great cast (including Christian Bale and the late Heath Ledger) and the strong iconography of the Batman brand were contributing factors to this of course, but it would have never happened without Nolan at the helm. He is not one of the more recognized filmmakers in the business, yet he should be. His filmography, now six films strong, is extremely impressive and it all started ten years ago with the release of a humble little indie called Following. 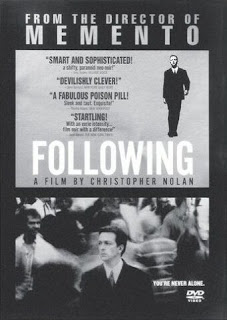 A lonely young writer (Jeremy Theobald) escapes boredom by 'shadowing' strangers at random. Living vicariously through the people he follows, he becomes obsessed with the lives they lead. As time goes by, it becomes harder for him to abide by the rules he set for himself.

Following is an excellent crime film. You can immediately see the beginnings of Nolan’s signature narrative style here. It feels almost like a run through for his subsequent film Memento – like Guy Ritchie’s Lock, Stock was to Snatch – which propelled him into the mainstream in 2001. Nolan is first and foremost a storyteller. The multi-million dollar budgets of The Prestige and Batman are just the bells and whistles on an already sound skill set.
At a scant seventy minutes and just three main characters, Following feels more like an intimate stage play, than a film. It is a shining example of engrossing filmmaking on a low budget. The difference between Following and The Dark Knight maybe a decade and five hundred million plus, but both were executed adeptly by a director at the top of his game.
Posted by Jay Clarke at 6:03 PM