City Of The Walking Dead

Last Sunday, Toronto was invaded by legions of the undead. The 6th Annual Zombie Walk kicked off this day’s Toronto After Dark festivities. By the time I got downtown, Bloor Street was already crawling with flesh eaters. It astonishes how big this event has gotten over just a few years, and by that I mean the Walk AND the Festival. There were multiple news crews on hand to document the occasion, which had a record setting two thousand ‘dead-tendees’ this year. The Walk set off from Trinity Bellwoods Park at three o’clock and made its way to the Bloor Cinema for a zombie movie double bill. There were undead of all shapes and sizes; zombies in baby carriages, zombies on stilts and even a group of zombie hunters running around with cap guns. Halloween comes a little early to The Big Smoke these days. I unfortunately didn’t get as many pictures as I would have liked, but I did snap this one of a couple that was sitting behind me in the theatre. 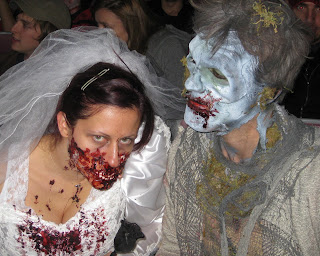 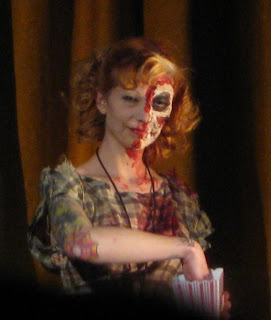 For more pictures of the event, check out blogger Roger Cullman's coverage here.
So, first up was Kevin Tenney’s Brain Dead. When this was announced in the festival programme, I first thought they were doing a special screening of Peter Jackson’s iconic gorefest. Then I realized it was a different movie with the same name. I was skeptical at first, but the trailer won me over. Sure, it looked bargain basement, but there were enough cool gore pieces for me to surmise that it might be a good bit of fun. 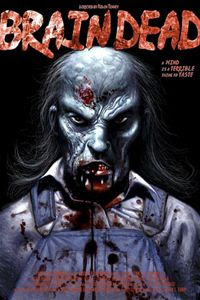 And that’s what I got. Brain Dead is a low budget effects film. No more, no less. It is largely hit and miss (mostly miss) in every other regard. There were so many one-liners flying at us, it’s a wonder the characters weren’t tripping over them. Joshua Benton as Clarence was the only real bright point, but I have to wonder why he was given all the good material. They probably should have spread it out a bit, to make some of the other characters a little less painful. Brain Dead also has all these weird music cues that I guess are supposed to be funny, but kinda aren’t. Kevin Tenney is a veteran horror movie director, but for some reason Brain Dead reeks of a first film. Not that that's a big problem for me, it’s just a realization I came to. Tenney did manage to get every actress in the movie naked though, so I have to commend him on that.

In a situation like this, you just have to focus on the gore. It is well executed by Gabe Bartalos (well known for his work with Frank Henenlotter among others), working by himself at cost. I was kind of hoping for a little more originality with the deaths though. There isn’t much in it that we haven’t seen in other low budget zombie outings. I was reminded of the Australian movie Undead. Brain Dead actually made me appreciate the Spierig Brothers’ debut that much more. They had way less than Tenney to work with and they still made a far superior movie.

During the Q&A after, someone asked him what I was thinking earlier. Why did he name it Brain Dead?

“Well, to be honest I just couldn’t think of anything better. When movies get sold to other countries, they often change the name of it anyway and you have no say in it. Even Peter Jackson’s Braindead got released as Dead Alive in the States. So I figured I’d just go with Brain Dead because it does fit.” 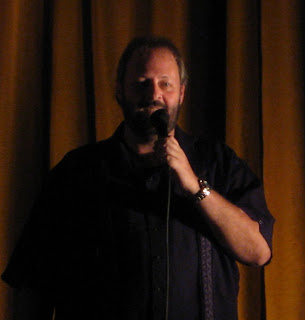 Kevin Tenney’s Brain Dead is pretty much what the trailer advertises. I’ve seen it done a lot worse, but also a lot better. Zombie movie fans are a pretty forgiving lot though. We just want to see things get red. Anything else is just bloody icing on the cake.

The second film of the double bill was Trailer Park Of Terror. I could have caught this at Fantasia, but decided to check out an animated indie called From Inside instead. Yeah… hindsight is twenty-twenty. 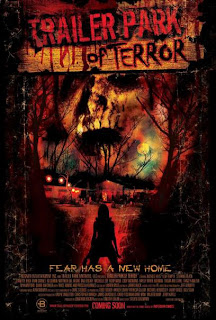 Trailer Park Of Terror is a pretty good time. I had no previous knowledge of the comic series the movie was based on, but I expect it is pretty fucked up judging from this. I’m actually kind of surprised I liked it to be honest, considering there wasn’t one likable character in the bunch. The lead Nichole Hiltz puts in a fine performance as Norma, taking on the challenge of having to play both protagonist AND antagonist throughout the movie. Director Steven Goldmann said during the Q&A that he was influenced by the old Universal features where the monsters were the bad guys, but still somewhat sympathetic. I don’t know if I’m onboard with that comparison though. It’s one thing to be Frankenstein, and another thing entirely to be an angry and sadistic zombie that likes to rip people to pieces.

Unlike Brain Dead, TPOT had no shortage of creative kills. The zombie makeup, provided by Drac Studios, was quite extensive. There were also multiple undead characters (the residents of the trailer park) that would have given any effects company a workout. Seeing all these characters in action reminded me how stoked I am for Jake West’s next picture Doghouse. The whole rockabilly vibe of the movie reminded me of 2004’s Dead & Breakfast. This redneck zombie thing is becoming a subgenre within a subgenre. Trailer Park Of Terror is not a bad effort. It has enough going on to make it stand out from the crowd".
At the end of the night, the undead masses shuffled off from whence they came, signalling the end of another successful zombie day in Toronto. I love this city.
Posted by Jay Clarke at 12:37 PM