Trapped In A Bad Movie

I remember seeing the cover for Steel Trap continually pop up on horror websites and thought it looked intriguing. Then I saw it being pushed at the Festival Of Fear, so I figured it had to be at least SOMEWHAT decent right? RIGHT?! 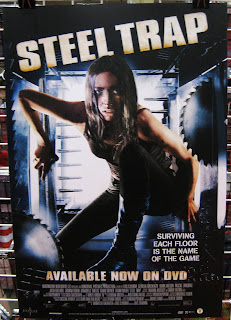 Six New Year’s Eve revellers are invited to a private party in an abandoned office building for a mysterious game. Their host is unknown, but when the guests start dying, it is clear they may not live to see the morning.

From the cover and synopsis, Steel Trap is advertised as Saw meets Cube. The problem is that it has neither the devilish moxie of the former or the dark production design of the latter. It is a movie of badly strung together ideas that were really not that great to begin with. Within minutes - even if I had ignored the painful opening party scene – I could tell Steel Trap was going to be horrendous… and not in a good way. We all know there are good bad movies out there. Take a stinker like Anchor Bay’s The Cook, for instance. It’s awful, but mildly entertaining in spite of this. And it had lesbians! Steel Trap is not good bad. 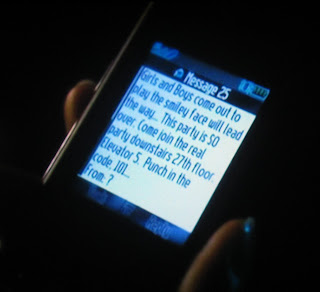 The must-miss event of the season!

Nevertheless, I thought I’d just wait it out until they got to the traps and then it might be okay. WRONG! You want to know why? Because there are NO FUCKING TRAPS! This movie is ninety minutes long and the closest thing to a trap is an elevator with tin foil teeth. It’s like walking into a peeler with no strippers in it. Like WTF?! And you know what’s worse? For something on the Dimension Extreme label, Steel Trap has a conspicuous lack of gore. When you put Steel Trap up against Inside, Broken and Diary Of The Dead, it reminds me of that old Sesame Street jingle ‘one of these things’. Maybe they thought no one would notice. Not fucking likely. And the dialogue… Oh, the dialogue. I couldn’t believe some of the shit that was coming out of people’s mouths.

“Don’t tell me you’ve never seen Cooking a la Kane?”
“Do I LOOK like a fucking housewife?”
“No. You look like a fucking slut.”
“Oh, I am Wade. I am.”
Steel Trap is a failure on every level. The story is laughable, the ending ridiculous and the movie just doesn’t deliver on ANYTHING it promises. I was seriously fighting sleep towards the end. I haven’t kept up with the Saw franchise, but I’m sure even the upcoming fifth flick will be miles more entertaining than this dreck.
Posted by Jay Clarke at 10:08 AM