A Man And His Dog.

Another film that was at Fantasia that I was glad made the trip to T.O was Red. 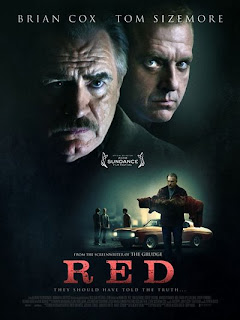 Avery Ludlow (Brian Cox) doesn’t have much in his life. He has his house, his general store and his faithful mongrel Red. One day while out fishing, three boys accost him and angered that Ludlow has nothing to give them kill his dog in cold blood. When the police and courts fail to do anything, Ludlow has to seek justice on his own.

Red is the newest adaptation of one of Jack Ketchum’s books. I had sworn off his brand name after seeing The Lost, but I kept Red on my radar for one reason. Brian Cox. When you have an actor of that caliber onboard, you give your production instant credibility. And I’m not talking about collecting paychecks like Ben Kingsley in Bloodrayne, I mean an actor seeing something in the character or script that they want to explore and make their own.

And Brian Cox delivers. He puts in a performance that makes the movie. Red’s low budget and relative blandness is evident throughout, but it never bothered me once. Cox’s excellent and nuanced turn as Ludlow is the best I think I’ve ever seen him. The cast is also rounded out by a lot of familiar genre faces like Tom Sizemore, Robert Englund, Amanda Plummer and Ashley Laurence.

Some people I talked to at the screening didn’t think that there was much of a payoff, but I found the outcome realistic. If the system were to fail someone like it failed Ludlow, I think that might be how it could play out. I mean, Red is considered a revenge movie yes, and could have been a lot more sensational, but I kind of like that it didn’t go that route. That sounds weird of me to say I know. Maybe I’m just relieved that I didn’t have to relive The Lost again. If that’s the alternative, then tame is good.

Red is not a remarkable film, but features a remarkable performance that is worth watching. When I was at a screening of The Wrestler during TIFF last month, Darren Aronofsky introduced his film by saying something that has stuck with me ever since;

“All you need to make a good film is an honest performance and a lens.”
This is as true for The Wrestler, as it is for Red.
Posted by Jay Clarke at 10:07 AM