Don't Try This At Home, Kids.

Saturday’s midnight screening was the UK horror flick Donkey Punch. It appeared on my radar after its Sundance premiere and I’ve been waiting to check it out ever since. 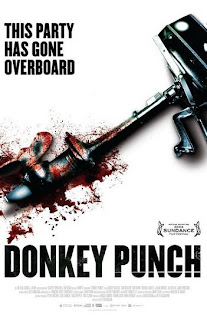 Three young women vacationing in Spain hook up with some guys at a bar and are soon partying on a large yacht that the men are looking after. After a sexual mishap leaves one of the girls dead, they start to turn on each other with deadly consequences.

Donkey Punch is a solid thriller. It is simple; occurring mainly in one location – the yacht that director Olly Blackburn makes great use of – and effective. I think its main strength is how plausible a situation like this could be, however it does take a while to get to the event that the title suggests. There is also a lot more sex than you usually see in a horror film (not that I’m complaining) and that's likely due to the Brits being a little more relaxed about such things. Of course stateside, Donkey Punch has quickly earned an NC-17. I’d say we Canadians might not be so far off, considering the giggles from the audience every time the phrase was used. The music in the movie is a nice addition too. Everything pre-'punch' is all contemporary tunes that the characters would listen to and when the S hits the F, it switches to a more conventional score, provided by Frenchman François Eudes. He is fast becoming one of my favourite composers, after his fantastic work on High Tension, Inside and most recently Vinyan.

The Q&A after was also good. Director Olly Blackburn seems like a pretty cool guy. He made mention of his influences like Knife In The Water and Alien, but when someone cited Dead Calm, he revealed that he actually set out to make the ‘anti-Dead Calm’.

“Dead Calm is a great film, but I wanted to get away from where you have these characters and then a psycho appears and attacks them. I wanted Donkey Punch to be where there was no psycho. The characters themselves are the enemy.” 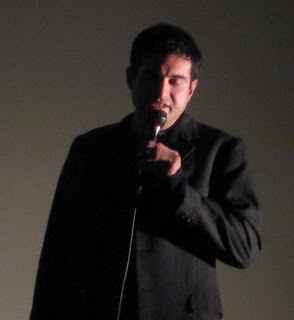 I think what you should take away from this is that donkey punches, Cleveland steamers and angry pirates are fine to joke about with your buddies, but not something that should actually be put into practice.
Posted by Jay Clarke at 1:41 PM

Great post! I was so surprized with Donkey Punch, I almost didn't go based on the definition but I'm glad I did it's been one of the highlights of the festival!