You know I’ve been raving about the Spanish flick [REC] for almost a year now, so what did I think of the American remake Quarantine? 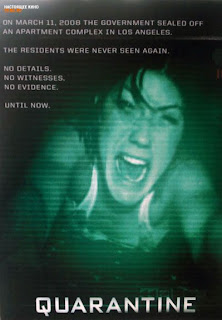 A TV news reporter (Jennifer Carpenter) riding along with a group of firemen respond to a call at an old apartment complex. Once inside, they realize that they have walked into the middle of a zombie outbreak.

I’d say that, for the most part, Quarantine is a success. The original movie is followed very closely, with a few more bits added in here and there. This could have been to reach the Hollywood mandated ninety minutes, but since [REC] directors Jaume Balagueró & Paco Plaza penned Quarantine as well, I imagine these were things they wanted to do originally and couldn’t due to budget restraints. A few of these new pieces worked well and some didn’t. As for the original ‘spikes’, Quarantine handles them for the most part with the same level of raw excellence. Man, if it just wasn’t for that damn camerawork though.

Which brings me to Quarantine’s main weakness. Balagueró & Plaza’s precision during the original was almost surgical in what they showed you with the eyepiece, while still making it seem spontaneous. Their US counterpart John Erick Dowdle seemed to be doing his best ‘Paul Greengrass-on-speed’ impression and just wasn’t as skilled. I could grin and bear it because I knew the story backwards, forwards and upside down, but I imagine to a new viewer this will get frustrating. I think mass audiences’ appreciation of this technique peaked with Cloverfield, so Quarantine may be a little late to the party. I guess we’ll see when the numbers come in. All I know is that I’m weary of checking out Dowdle’s earlier work The Poughkeepsie Tapes if it’s all going to be like that. And I don’t know whose decision it was to speed up the camera during certain parts, but it was completely unnecessary and came off as amateurish.

As for Jennifer Carpenter, I thought she was great in this. She really went for it one hundred percent, breaking away from her crass persona we all know from TV’s Dexter. I think she must have been channelling Marilyn Burns for the third act - which is where Quarantine really hits its stride - as she becomes a hysterical mess. I can only imagine the amount of energy it took to keep that level up for multiple takes. There are tons more familiar faces in this movie, as well. Jay Hernandez (Hostel) and Johnathan Schaech (Doom Generation) appear as firemen and Dania Ramirez (Maya from Heroes) and Rade Serbedzija (Snatch’s Boris the Blade) play some of the building’s inhabitants. It also seems that Doug Jones (Hellboy, FF2) is now the go-to-guy anytime someone in the industry needs a thin man.
Looking at it from the perspective of the original – which I know is unfair, but considering the near flawless film I believe [REC] to be, it is unavoidable – I don’t feel that Quarantine is as intense or as raw as its predecessor, but if you are new to this little roller coaster of a project, you’ll likely enjoy the ride. I will never understand some of the marketing choices, but I think if audiences aren’t annoyed by the chaotic camerawork, Quarantine should do quite well.
Posted by Jay Clarke at 11:47 AM