If there is a country that can compete with France as the current kings of horror right now, it is Thailand. They have been releasing quality product for years, with titles like The Eye, Shutter, Alone and Victim. That is why I was extremely excited when I heard the Thai anthology film 4bia was coming to Toronto After Dark. 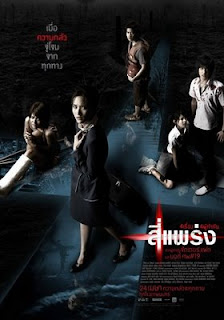 4bia is a fabulous group of stories that fit right in with the other great stuff coming out of that part of the world. Banjong Pisanthanakun & Parkpoom Wongpoom, the pair behind Alone and the original Shutter (two of my faves) were the masterminds behind this and have now cemented themselves as premiere players on the horror scene. There are many reasons why 4bia works so well. It has a little bit of everything, being book ended by two great scary stories, with action and comedy tinged ones in between. There is no wrap around story, just cool little Easter eggs within each short that reveal they all take place in the same universe. If Asian horror movies have one sin, it’s that they often pad their movies with filler between set pieces. The best thing about 4bia is that because each installment is just twenty-five minutes, they always get right to the goods.

After a sweet looking title sequence, 4bia gets right into it with the first story. “Happiness” is about a young woman, housebound with a broken leg, who begins to text back and forth with a stranger on her cell phone. Though they are the most advanced region in the world, Asia seems to have this underlying fear of technology. Phones, video and computers have always played a huge part in this 21st century Asian horror renaissance. Despite its modern underpinnings though, Happiness still bears all the hallmarks of an old campfire tale. The climax of this story got the biggest rise out of the audience, so 4bia definitely starts off on a thrilling note. The second part called “Tit For Tat” was probably my least favourite. It had a Final Destination vibe that could have been cool, but one-note characters, annoying editing and terrible CGI ruined it for me. 4bia got back on track with story number three though. “In The Middle” about four dudes on a rafting trip was absolutely hilarious. Filled with self-referential humour and laugh out loud dialogue, it was a nice change of pace from the other three. The last installment “Last Flight” returns to the scares, with a simple Twilight Zone style yarn involving a flight attendant and her single “passenger”.

4bia was a blast and the crowd was really into it. I think the screams from the audience during the big moments made me jump more than the movie itself. When you can actually feel the collective anticipatory energy of the crowd around you, that is when you know you have a winner on your hands.
Posted by Jay Clarke at 3:09 PM