I was absolutely delighted when I heard the announcement that someone (namely Mya Communication) was FINALLY stepping up to the plate and releasing Dario Argento’s third film Four Flies On Grey Velvet on DVD. At last, a decent version of Argento’s almost lost film only previously available on shady VHS bootlegs. I still remember the one I rented from Queen Video many years ago. It had Japanese subtitles and the audio toggled back and forth from English to French. 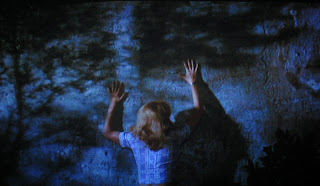 Not ideal circumstances, but as I’ve said before, in the era before DVD, just actually laying eyes on some of those old European gems – in any form – was an experience to be relished. Anyway, I was walking by Queen Video the other day – on my way to see The Brood actually – and Four Flies was staring at me through the window. I’d been meaning to watch it again and I still had a few April Showers slots to fill, so viola! 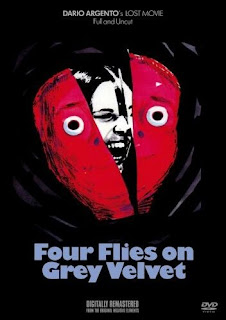 When Roberto (Michael Brandon) accidentally kills a man who has been following him for days, he sees a figure in the distance snapping pictures. At first Roberto suspects blackmail, but the stranger never asks for money. Then, people around him start dying.

Watching Four Flies again reminded me why I love Argento so much. I mean just look at this clip from the energetic opening credits sequence.

I get the feeling Dario was really experimenting with this one, as there is some really crazy shit going on here. Even though some things work better than others, the kinetic camerawork is quite remarkable in places. It is what really drives the piece, but I suppose you could say that about most gialli. Style over substance and all that. The music is fantastic and is front and center because the main character is a musician. What I found interesting was that Ennio Morricone scored the film (it was the last Argento film he would work on for many years because of a falling out) even though it often sounded more like what we would come to expect from Argento's other musical collaborators Goblin. Four Flies looks like a typical giallo, yet I found there were a few things that stood apart from Argento's usual recipe. First, the protagonist is kind of an asshole. And I don't mean arrogant like David Hemmings' character was in 1975's Deep Red. I mean, Roberto is a douchebag. He doesn't seem to like many of the people he hangs out with and once in a tight situation, he treats it with a perplexing air of nonchalance. Take this tender moment with his wife Nina, played by the lovely Mimsy Farmer.

Further breaking from tradition, Four Flies doesn't sport the if-I-could-only-remember-this-really-really-important-thing device. There's a 'thing', but it's not setup until much later. It also has this cool little foreshadowing bit that is unique to this film, as well. However, for every path strayed; there is one familiar. Four Flies still has the expected parade of eclectic characters, including a local thug named God and Arrosio, a gay private detective. It also has a large helping of hilarious pseudo-science, introducing the likes of a 'homicidal paranoid' and a medical procedure that I first saw in a first season X-Files episode. I wonder if Chris Carter is an Argento fan?

Four Flies falls right in the middle of 'the animal trilogy' for me. I like it more than Cat O' Nine Tails, but it falls far short of my favourite Argento film The Bird With The Crystal Plumage. For those out there who have been underwhelmed by Dario's last few efforts – I'm not one of them btw – you should definitely check this one out. It will bring back some fine memories for you, I'm sure.
Posted by Jay Clarke at 7:59 AM