Time For A Look Back.

I've got another old festival film for you this month that I've been meaning to put in for a while now. 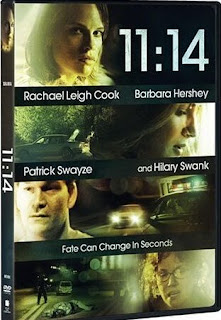 Five separate stories all converge at 11:14pm in the small town of Middleton.
11:14 was the clever and enthusiastic debut by a young director named Greg Marcks. I remember the first question directed at him at the Toronto Film Festival Q&A in 2003 was,
"How OLD are you?"
To which actress Rachael Leigh Cook, who was by his side, cut in,
"That's what I said!"
Marcks replied that he was twenty-seven, but his experience making many short films at his stint at Florida State University prepared him for his first foray into feature film. I can see how that could be considering 11:14 is basically five short films interwoven. He cited The Coen Brothers Blood Simple as a major influence, but the parallels 11:14 has with the works of Tarantino were far more apparent to me. A quirky charm resonates throughout, mainly due to the film’s ability to make outrageous situations work based on the way they are presented. There's also the nice bonus of seeing the aforementioned Cook in a plaid skirt. 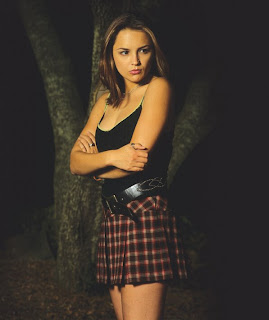 What really stands out about this piece is the massive ensemble cast he was able to assemble for this. In the addition to Cook, the film also includes Hilary Swank (who also served as a producer), Patrick Swayze, Barbara Hershey and Henry Thomas. In addition to it being quality entertainment, 11:14 could also double as an instruction video for traffic safety. Don’t drink and drive, NEVER take your eyes off the road and NEVER EVER pee out the car window.

Marcks disappeared off the map for a while after 11:14, but is set to return this year with his sophomore effort Echelon Conspiracy starring Ed Burns and Ving Rhames. Unfortunately, 11:14 is another instance of a good film that plays well at festivals, then disappears for ages until its finally dumped on DVD - in this case a full THREE years later! If you like fractured narrative character pieces, then 11:14 is a solid example.
Posted by Jay Clarke at 10:43 PM