Next up is a 2007 film called Borderland. It was a Zip.ca special, which means it arrived on my doorstep many months after I put in my queue, thus all memory of why it was there had long faded. Nevertheless, it had been on my coffee table for a while and this April Showers thing gave me a good reason to cross it off. 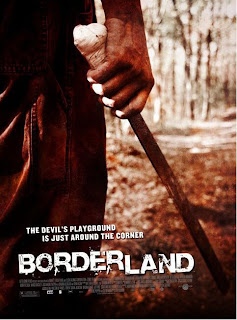 Three young guys head into Mexico during spring break. They quickly help themselves to the cheap booze and easy women, but things turn deadly when one of them vanishes.

Admittedly, I did roll my eyes when I saw the ‘based on true events’ thing come up on the screen. I would find out later however, that this was actually the case for once. After the first scene, I was ready to write this off as another Hostel clone set in Mexico – which would have been easy to do considering all the torture early on – but by the end it actually turned into a solid little movie. The acting here is quite good. Rider Strong doesn’t look like he’s aged much since I last saw him in Cabin Fever and Sean Astin shows up cast against type. I’d also like to point out that Martha Higareda is a fucking rocket! I have to say I kept thinking I had this movie pegged – who thought Spellbinder towards the end? – but this is a straight up story. It’s an extremely dark one to be sure, yet with no tricks. It was kind of refreshing really. 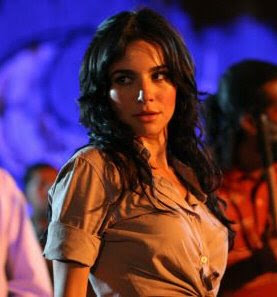 In the interest of balance...

The strange thing about Borderland is that I don’t know if I would even call it a horror film. It has several elements of the genre, but it definitely feels more like a crime story with a third act that would be at home in an action flick. That’s not a complaint; I’m just making the observation. This was after all, an 8 Films To Die For Horrorfest title. Now, I’m not pretending to be an expert on the kind of movies After Dark puts in their yearly programme – the only other 2007 entry I’ve seen is Mulberry Street – but I would assume horror would be prominent on their shopping list. The subject matter is certainly horrifying enough to qualify though. Borderland takes place in an area of the map that I have absolutely no knowledge of, which always makes me uneasy. I wasn’t aware that these border towns essentially exist independently of the two countries that surround them. It’s really kind of scary when you think about it considering how popular they are with the college kids during spring break.

So, at the end of Borderland I found out this story – though obviously embellished – was, in fact true. What is most crazy about this is not what happened, but WHY they did it. I mean, these cats were cuckoo for Cocoa Puffs. The documentary on the DVD about the real case did not do anything to restore my faith in humanity either.

Though it comes off as more of a true crime tale than a horror flick, Borderland is a well-done and worthwhile venture. It’s not going to make you feel good about the world, but then again… what were you expecting?
Posted by Jay Clarke at 7:55 AM