For the last six or seven Sunday evenings, The Bloor Cinema has been doing a programme called The Wright Stuff. Edgar Wright (director of Shaun Of The Dead and all around cool cat) – in Toronto for the last few months shooting the film adaptation of Scott Pilgrim vs. The World – has been presenting films that he digs. For the final night, Wright chose two* Canadian films that he puts among his favourites, the first being David Cronenberg’s 1979 film The Brood. And as an unexpected bonus, the film’s star Art Hindle was also in attendance. 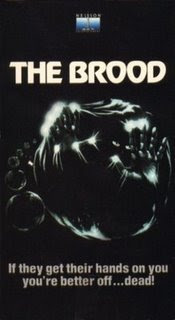 Frank Carveth (Art Hindle) confronts his institutionalized wife’s psychiatrist (Oliver Reed) when his daughter comes back from a visit with signs of abuse. When people around him start dying, Frank investigates whether the doctor’s unorthodox treatments may be somehow to blame.

The Brood is an excellent horror film. Even with very few bells and whistles, it hits you over the head with ample atmosphere spearheaded by Howard Shore’s awesome score. It is one of those instances where many simple things line-up together perfectly. It had been about twenty years since I’d seen The Brood and it was shocking how much of it I’d forgotten. I had completely blotted out the film’s climax! A device that I loved and one that is not utilized nearly enough in horror films is that most of its horrific events take place in the daytime. It throws the light-equals-safety rule out the window and adds an extra layer of tension. I have to concur with Edgar Wright’s thoughts about how this movie was made during a time when horror movies were actually about something. The story unfolds in an engaging way and has all the elements we’ve come to expect from Cronenberg’s genre films, like twisted visuals, quirky characters and of course, body horror. There are so many memorable shots in this movie… 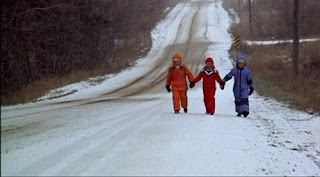 Only Cronenberg could make snowpants scary.

It has been ages since I’ve watched anything with Oliver Reed in it. Man, that guy was the shit. Art Hindle regaled the crowd with some Reed stories after the movie, most of them involving brandy and/or underwear.

I was delighted to find that even after thirty years, The Brood still holds up beautifully. Even though its low budget shows at points, it has an energy that resonates with images that just burn their way into your psyche. After watching The Brood, my assertion that Toronto is a great place to film a horror movie has been further cemented. If you don’t mind filming around the snow or construction – depending on which time of year you come – you’ll be golden.

Lastly, there was a really fun Q&A after the film and rather than me trying to recall it, you can watch video of the event taken by fellow Toronto blogger Movie Moxie by clicking here.


*-The second film of the double bill was Don McKellar’s 1998 end of the world picture Last Night.
Posted by Jay Clarke at 7:46 AM

I want to see this, the poster art looks good. I'm somewhat new to horror so haven't seen 'the classics'. Here's a question: How do you put the 'featured articles' on the right of the page? Do you do new 'text item' on the blogspot layout page?

Yeah, you pretty much can't go wrong with any of Cronenberg's early works.

As for the right hand menus, I believe you "Add a Gadget" and select "Link List". Then you can insert a title (i.e. featured articles) and link stuff from within your site or anywhere else on the Web.

Hope this helps and thanks again for reading.

hey jay, how about getting in touch with cindy hinds and aranging an interveiw with her about her memories of filming the brood in late `78, that would be superb, cheers mate.