I'm exhausted. Yesterday I was at Kurt's (from Row Three) for his Alien Quadrilogy marathon, and then Serena Whitney's (of Killerfilm) for her Killer Hooker Movie Nite. Earlier today, ball hockey. Tomorrow, the dance of screaming muscle pain. Anyway, better late than never, right?
One Sheet From Hell.

The new poster for Drag Me To Hell released this week. 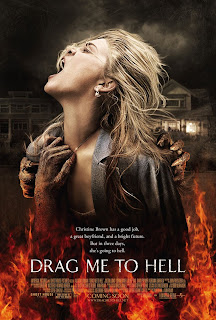 I'm about as lukewarm on this, as I was the trailer, but I still have faith.
Retro Space.

Dirtyrobot recently sent me a link to this clever little bit from The Minus World. It featured current video game titles getting the NES treatment. 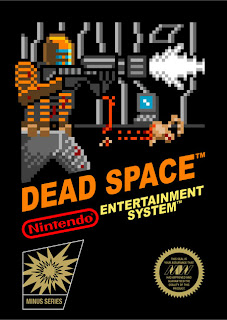 Red Shirt Pictures announced this week they are releasing the classic 1986 sci-fi/horror flick Night Of The Creeps on DVD. This was a long time coming. I'm looking forward to this a lot, especially because RSP did such a great job with the release Fred Dekker's other eighties institution Monster Squad in '07. We're on a good roll right now. First, Four Flies On Grey Velvet earlier this year, not NOTC. Now, if we could just get Paperhouse and Deadly Eyes in some sort of disc form, that would be golden. 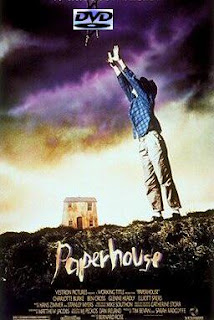 Great post.
Thanks for showing me the marvelousness of The Minus World.

And great news on Night of the Creeps. I grew up in the 80s and STILL haven't seen this film. I've been waiting for a decent way to watch it other than a chewed up VHS or a grainy YouTube clip.

And what exactly is PAPERHOUSE???!!!

Ah, Paperhouse. It's a British flick from the director of Candyman made in the late eighties.
It's about a bed-ridden child who draws to pass the time and whatever she draws, she dreams about when she falls asleep. Only her dreams get progressively darker as the movie progresses. I adore this film.

Your a Trooper, Jay! Glad you made it out.