I'm not alone in wanting Spring to finally take hold here. It was a beautiful Easter weekend we had here in the GTA. Then again, we had a beautiful day on the fifth and then I woke up to snow on my car the next morning. I may sound like a broken record, but I'm Canadian dammit! It's my God-given right to bitch about the weather. Today begins a new week-long segment called April Showers. It is my way of emploring whoever controls the weather around here to get Spring moving already. Enjoy!

Let’s start this off with Hollywood Chainsaw Hookers, a little flick from 1988 that I caught at Serena’s last movie nite. 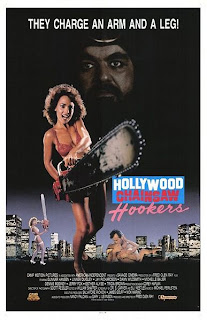 The credits rolled on Hollywood Chainsaw Hookers and when she asked me what I thought, all I could say was, “yeah… that wasn’t the best”.

As shocking as this might sound, there really wasn’t much going on here. There was a lot of girl-picks-up guy-in-a-bar-and-goes-back-to-his-place-where-she-promptly-disrobes-before-chainsawing-him-to-pieces. Rinse. Repeat. Wow, that was a lot of hyphens. In between we are treated to the voiceover musings of Sam Spade wannabe Jack Chandler (Jay Richardson) trying to track down a missing girl (Linnea Quigley) who turns out to be the chainsaw cult’s newest pledge. All while Gunnar Hansen (Leatherface from the original Texas Chainsaw Massacre) stands in the shadows glowering. 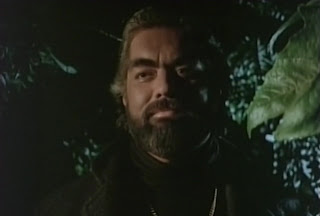 You know, HCH is a movie I wish I’d seen when I was a lot younger. With excessive nudity still being fairly hard to come by at that time, I think this would have kept me more than interested. Despite its many shortcomings, I’m sure it would’ve been one of those titles that I look back on fondly, much like Cannibal Women In The Avacado Jungle Of Death – and that movie was PG-13! I wager that THIS would have been more stimulating to me then, as well.


Now, it just looks… oh, who am I kidding? That was awesome. Regardless of how underwhelming HCH may have been, it had Linnea Quigley in it and I never tire of seeing her – with thirteen or thirty-four-year-old eyes. Like other B-movie vixens Elizabeth Kaitan and Kathleen Kinmont, they represent a wondrous era of… discovery in my life.

It takes all kinds...

Great review of HCH! lol Yeah...it was definitely the weakest of the killer hooker movies...but it's a must-see! :P