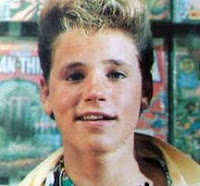 I woke up to some sad news this morning. Actor Corey Haim died earlier today of an accidental overdose. He was 38. Regardless of how much of a train wreck his life may have become, back when I was a kid, Corey Haim spent a lot of time on my TV screen. Considering I didn’t see his stint on The Edison Twins until reruns started playing on YTV in the late eighties, I guess I first saw him in the Stephen King adaptation of Silver Bullet, acting alongside fellow Torontonian Megan Follows. A year later came Lucas, where Haim and I apparently looked enough alike to have me called Lucas for a good chunk of my high school years.

Obviously, where Haim really became eighties canon was 1987’s The Lost Boys. I loved this movie for several reasons. It had a great cast, and the music rocked. In fact, the soundtrack was the first CD I ever bought. 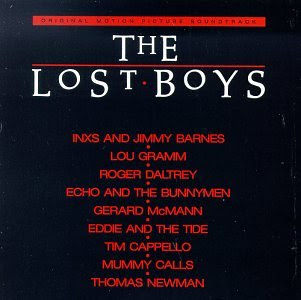 As was the case with a lot of eighties vampire movies, like Fright Night and The Hunger, the filmmakers did away with the traditional vampire tropes and modernized them. Capes gave way to leather jackets and castles to houses in suburbia. Like Haim’s character Sam, I was a bored outcast, with an older brother who was way cooler, so the movie resonated thusly.

Outside of horror flicks, like The Lost Boys and Watchers, he was also in License To Drive, the second of many projects he did with Corey Feldman. Being of an age when I saw it, where having my own license was only a few years away; Haim was again playing a character I could root for. An underdog fumbling through his formative years just as I was. 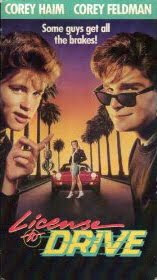 Now, you can scoff at me for all this sentimental bullshit, but for a time Corey Haim was making movies that I wanted to watch and therefore became a sizeable part of my childhood as a result. Given what had been going on in Haim’s personal life the last several years, I guess today’s headline shouldn’t be a complete surprise, but that doesn’t make it any less a damn shame.
Posted by Jay Clarke at 5:32 PM

It really sucks that we lost him. R.I.P. Corey.