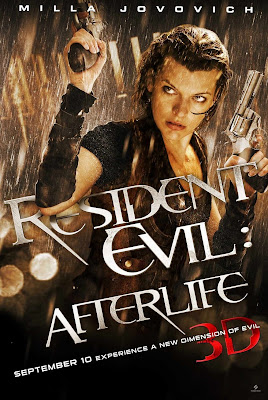 Alice (Milla Jovovich) continues her mission to destroy the Umbrella Corporation, as well as reunite with her comrades, including Claire Redfield (Ali Larter) in Arcadia, a rumoured safe haven in Alaska.

So, what's better than Milla? Multiple Millas in 3-D! Let's get this out of the way right now, I had a blast watching this. I am actually one of the few people that enjoys these movies – okay, Apocalypse was a stretch – so I knew exactly what to expect. Concentrated eye candy.

The first sequence is a literal feast. Within a few minutes I was like, “now, THIS is how 3-D is SUPPOSED to be!” After all the post-3D stuff studios have been churning out since last year's Avatar, I'd almost forgotten how successfully it can be utilized. Every possible gimmick you can think of happens here and I had a huge smile on my face the whole time. 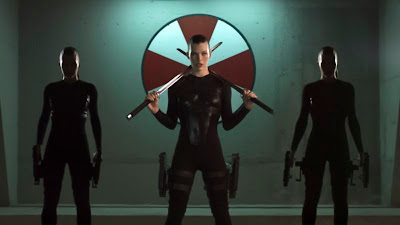 The movie is also perfectly augmented with a great score from Tomandandy. The Resident Evil movies have always sprinkled in bits of the games and Afterlife is no exception. It borrows heavily from the game's most recent incarnation Resident Evil 5, including the Executioner boss and the chest spider thingamajigs. The movie also has the most game characters involved as well, including a nice surprise during the end credits. Even the zombie dogs have a return appearance, which I thought looked friggin' wicked. There's even a water level, err, I mean, scene.

Now, I'm not going to try and tell you that there is a lot of substance to this movie because there isn't. In fact, the only story that exists is just filler in between action sequences. This shouldn't be news to anyone though, as I think the only one that really took a stab at storytelling was the initial installment – and I imagine that are large number of people that would argue even that. To be perfectly honest, it didn't bother me. Why? 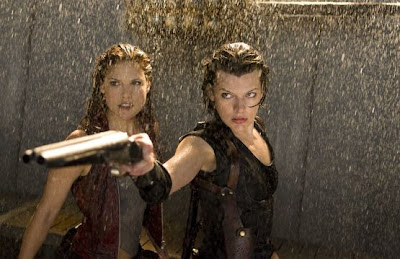 Because, I could watch Milla read the phone book.

I guess the only real negative I can point out here is that a lot of the character's death scenes are fairly uninspired. They either happen in the blink of an eye or off screen. There were a few characters in particular that could have been offed far more dramatically.

The ending is, of course, another cliffhanger and call me crazy, but I am more than willing for another round, as long as it has Milla doing what she does best.
Posted by Jay Clarke at 2:12 PM