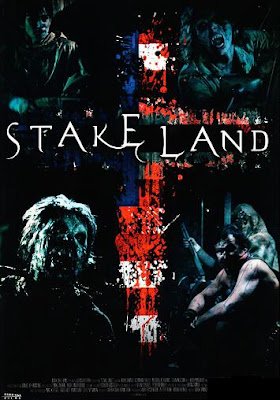 Set in a post-apocalyptic America overrun by vampires, a group of survivors head North in search of a rumoured sanctuary called New Eden.

Stake Land was awesome and far and away my favourite Midnight film this year. I couldn’t have imagined a better follow-up to Mickle’s 2006 debut Mulberry Street than what he’s brought us here. His partnership with Glass Eye Pix, a company that knows how to stretch a dollar, has proven extremely fortuitous, as everything about this picture screams quality. The vampire designs are fresh and interesting, the gore is top notch and the wonderful old-timey score seems pulled right out of a classic western. The beautifully stark locales and set design also make this film look like it costs a lot more than I wager it actually did. 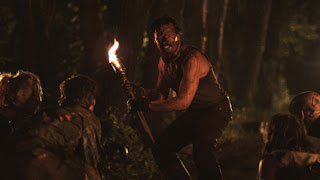 The best two elements of Mulberry Street have been carried over to this film. The first is Mickle’s emphasis on character. In Mulberry Street, we spent a significant amount of time getting to know the characters, so when the shit hit the fan, we actually cared what happened to them. The same goes for Stake Land. For every scene of ugliness, Mickle manages to somehow inject an opposite flash of humanity. The other element is Nick Damici, who plays the tough-as-nails vampire killer known only as Mister. He makes this role even more memorable than his turn as the shy, ex-boxer Clutch in Mulberry Street. I applaud Mickle for sticking to his guns and insisting that Damici play the lead, although I don’t think it took much convincing. What makes Mister stand out is that even though he is a badass, he’s also a good person. He’s not a jaded asshole, which is a common trend with male heroes these days. Mister may be gruff, but he actually cares about his fellow man. Backing up Damici is a solid supporting cast, including Connor Paolo, Danielle Harris and Kelly McGillis, who makes a return to the big screen after almost a decade absence. 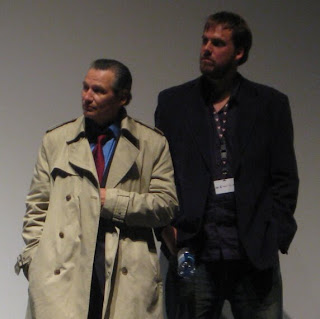 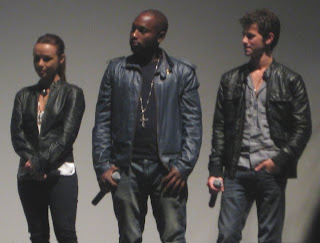 Some had been quick to compare this to last year’s Zombieland, but within the first five minutes, you realize these two are alike in name only. A film it does resemble however, is John Hillcoat’s recent adaptation of The Road. It follows the same template of post-apocalyptic road movie, but Stake Land is not nearly as depressing or one-note. It is clear now that Jim Mickle is not only a talented filmmaker, but also one that excels at bringing new ideas to tired genres.

I’m not the only one who felt this way either, as I just found out yesterday that Stake Land won the People’s Choice Award for best Midnight Madness film. Congrats, Mr. Mickle, it is well deserved.

To read a cool interview with Mickle & Damici from the official Midnight Madness blog, click here, and here below is Robert Mitchell's video from the red carpet.

Sounds like it has an old school feel about it. Love the poster and your descriptions of the sound/special-effects make me think of some of the late 70s/80s horror classics (of course Kelly McGillis' inclusion helps with the 80s nostalgia).