I want to take this opportunity - before all the TIFF madness hits – to talk about a Texas indie I saw recently called Underbelly.

After seeing a random Rue Morgue tweet mentioning it, I checked out the film’s website. The trailer looked semi-interesting, but it wasn’t until I viewed the first scene – also available on their site – that I was fully hooked. Luckily, I was able to find it on a subsequent trip to Eyesore. 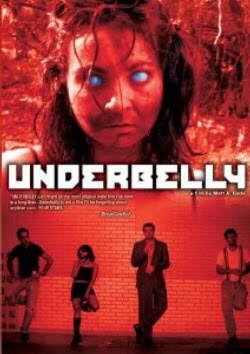 A novelist (Mark Reeb) travelling with his wife, crosses paths with a gang of criminals on the run while passing through a small Texas town that seems to have a few secrets of its own.

You ever see one of those movies, where you know you liked it, but you can’t quite pin down why? Underbelly is one of those titles.

Despite the restraints of its ultra-low budget and a cast that is largely made up of non-actors, it still managed to quickly get me onboard. It hits you immediately with the aforementioned opening that has a great campfire tale quality that really brings the chills. I remember telling Schwartz about that scene while we were driving to the Expo and he was instantly intrigued. From there, Underbelly never lets the viewer in on where its going or what its intentions are. It is almost like writer/director Matt A. Cade had three or four different unfinished scripts that he decided to meld into one. However, the result isn't the disaster you'd expect. 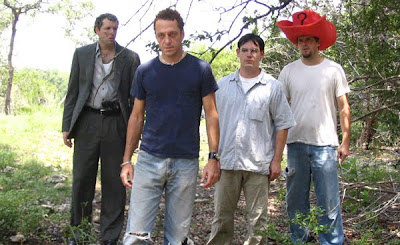 I have to give props to Stuart “Feedback” Andrews for blurbing what might be the most astute movie description ever;

"It was like some bizarre cross pollination with Last House on the Left, The Vanishing, Pulp Fiction and The Ring."

You add Twin Peaks in there and you’ve got it nailed. The remarkable thing is that even though so much of this movie seems like something else, it becomes an entirely new animal when all these pieces are stitched together. It is amazing to me that I liked Underbelly as much as I did, as it often seemed to go out of its way to make me dislike it. From the shrill Sweet Lily character to its strange tangents, including a musical number – a little ditty about the right tool for the job – that comes out of nowhere. Although, to be fair, the latter was not as bad, as it was jarring. There was also a character that just disappeared with absolutely no explanation whatsoever*. Fortunately, by that time I was already in and willing to overlook many of the film’s shortcomings. 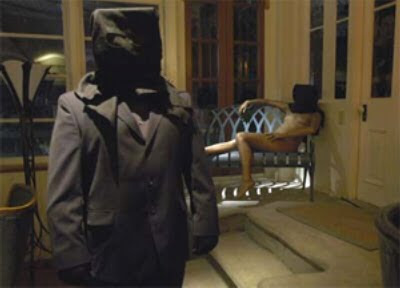 Sadly, I think the ending was a little too ambiguous for its own good. I know there is merit to letting the audience decide for themselves – some filmmakers have built their careers on being esoteric – but the way things are left in Underbelly erred more on the side of frustration for me. There are allusions to this on the DVD's fourty-five minute featurette. Almost every cast member says something like, “you'll have to ask Matt this” or “Matt would be the one to talk to about that”, but the interviewer never actually talks to him. I really wanted to hear more about the process.

As you can no doubt see, Underbelly is a unique little oddity that even a week after viewing it, is still rattling around in my brain.


*It’s a funny coincidence that I sandwiched Underbelly in between screenings of Piranha 3D & Machete, as they both also had characters that just inexplicably vanish in the third act.
Posted by Jay Clarke at 8:47 PM