So, I know you're all skeptical of Let Me In. I used to be among you. Why would anyone want to redo Let The Right One In? It is a film regarded by many as perfection, so who would be crazy enough to take the risk of screwing it up? Well, a man by the name of Matt Reeves. 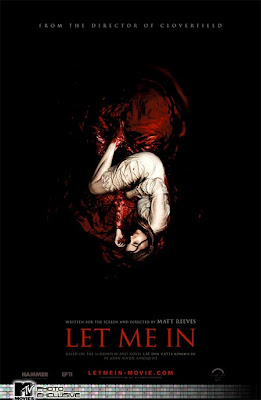 Owen (Kodi Smit-McPhee) is a twelve-year-old loner, constantly bullied by the kids at school. One day, a girl named Abby (Chloe Moretz) moves in next door and they become friends. Soon, Owen begins to suspect that Abby might not be what she appears.

My hat goes off to Reeves because he has orchestrated a miracle here. Let Me In is better than I ever could have hoped. Is it as good as the original? Not quite.

But it's pretty fucking close.

Please be assured that this is not a shot-for-shot redo of Let The Right One In. While a lot has remained the same, there are some differences here. Since it has only been two years, it is easy to forget that Let Me In is actually another adaptation of the original book, rather than the film. Reeves has made some exceptional choices on what to focus on and what to leave out and I would certainly argue that some sequences are handled even better than its 2008 counterpart. You'll also be happy to know that Reeves has shied away from very little here.

Both Chloe Moretz & Kodi Smit-McPhee are phenomenal, but to be honest they were the thing I was least worried about. Those two have already proven they have chops way beyond their years and the only question was whether they'd click together. They do. You throw in great supporting performances from Elias Koteas and Richard Jenkins and you really have something here. 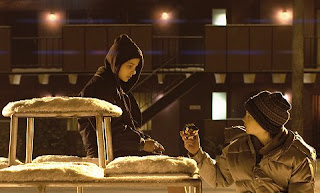 One more thing I love about Let Me In is how natural the Americanization of the film is. It is not set stateside just for the sake of familiarity. Just like the book was an exploration of author John Ajvide Lindqvist's childhood, Reeves has inserted his memories of growing up in the eighties to make it an even more organic experience. The reason this story resonates with me so much is that I lived Oscar/Owen's life. I went through what he did at that age and often wished someone had my back. Now, Reeves adds the exact environment I was living in when this was happening to me? It was like almost stepping into a time machine.

My only real problem was some dodgy CGI, but if you recall, Alfredson's version had a weird out-of-place sequence, as well. Did that affect your enjoyment of that film? Considering how much quality you are getting here, I was like 'okay, that was an unfortunate decision, moving on.' Don't let that make you think that this production skimped on the practical effects though, as it is wonderfully gory when it needs to be. And let's not forget how beautifully shot it is. Right from the opening long shot of the snowy New Mexican landscape at night, Reeves utilizes a masterful eye.

To everyone who dismisses Let Me In as unnecessary, I say that when a film is this good, it becomes necessary. It earns its right to exist. There is nothing wrong with bringing a film to the masses – and by masses, I mean the percentage of filmgoers who won't read subtitles – if none of its subject matter has been diluted. Just think of how many people this amazing story is going to reach now. 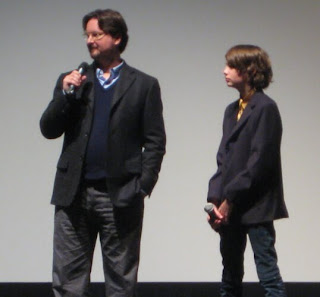 I know it sounds like I've been on the defensive, but I just really want people to see this. If anyone decides not to see Let Me In based on principle, I don't blame you. It's understandable. All I can say is that you will be doing yourself a disservice.
Posted by Jay Clarke at 3:03 PM

I've been adverse to this film since I first heard of it but I'm still willing to see it. Up until now, I was only looking to see it so I could say, "See? Look how bad and unnecessary this is" but the way you've written about it here makes me put my complete skepticism on hold.

Of course, I could end up hating it anyway but I can't form my opinion without seeing it. So sad, though, that the "majority" won't read subtitles. Now THAT is doing yourself a disservice.

I don't think you've actually even read the book if you think what Reeves is doing constitutes as a new adaptation of the source material as opposed to a remake of the Swedish film. Given how much different the book was and how much Reeves follows the film's version of events as opposed to the book's.

Ok I'm going to ask something that seems silly, but I still must ask it...
As someone who still has not seen the original (I know, I know, shhhh I've been meaning to...) should I see the remake 1st... or the original 1st?

I know the original is on Netflix instant, but I heard so much backlash over it having the poor subtitles that I just haven't gone out and purchased the DVD with the correct theatrical subtitles.

@Matt - that could very well be true. I know I was pretty impressed by it. And no doubt, I've never understood people's aversion to subtitles.

@Phillip - Nope, you're right I haven't. I was going by what Reeves himself said his intentions were.

@AHS - If you can get your hands on the theatrical subtitled version, then yes, make seeing the original first a priority. Then see Reeves' version.

Maybe you have to see it to believe it but I'm still unsure whether I care to see this or simply watch the original film again.

It's a remake. It's actually less true to the book than the original was. It takes one interpretation of the original film that wasn't in the book. It also makes this a movie about a manipulative vampire child who goes vampire attack mode when feeding. So where exactly is the sympathy for her? Not to mention the love story if she's just using Owen to kill for her later on. Quick how many new things did he bring to the table?!

"f none of its subject matter has been diluted. Just think of how many people this amazing story is going to reach now." In the original book Eli is a castrated boy who meets Hakan an in return for blood, well imagine what a pedofile would want. In the original book, Oskar and Eli have known nothing but bad in their lives and finally find something good with the other. Does this remake leave room for interpreting that? If it has then yes the subject matter was not only diluted but taken away completely. Giving you as I said, one interpretation of the original movie that wasn't in the book. Do yourself a favor friend, read the book then watch the original, then watch the remake again.

"I went through what he did at that age and often wished someone had my back."

God, Jay, I hope I wasn't one of the people who bullied you back in Lorne Skuce! I was a righteous terror back then.

@buck - Like I said, I was going by what Reeves said his intentions were. He didn't strike me as the disingenuous type, but fair enough, I will have to read the book to see if I agree with you.

@Anonymous - Don't worry, I don't have an "Anonymous" on my list.

You should read the book. If Reeves says adaptation, it's a blatant lie and should be called out on it. Unless he deluded himself into believing that.