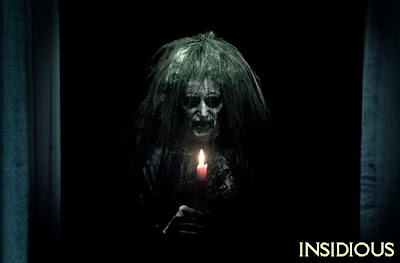 Josh (Patrick Wilson) & Renai (Rose Byrne) have just moved into their new home, when one of their children suddenly slips into a coma. Soon, Renai begins to suspect there are evil forces in the house.

I liked Insidious a lot and think it is the best thing they've done so far. The shift from blood & guts to a more traditional atmosphere-based approach has fostered an astonishing amount of growth in these two as filmmakers. It is amazing to me that these guys, who are barely out of their twenties, managed to outclass John Carpenter (whose new film The Ward played the evening before) in serving up old school horror. Wan's intention was to take the classic haunted house story, in the vein of something like Poltergeist, but make it seem fresh and original by sidestepping a lot of the tropes that usually accompany the genre. In fact, while writing the script, Whannell had a list of clichés, like the fake jump scare, to avoid.

I mentioned before that Wan has never, up to this point, managed to nail that elusive third act. Whether it was Cary Elwes chewing scenery in Saw or Death Sentence's Kevin Bacon transforming from innocuous office drone to invincible killing machine in a matter of minutes, the tail ends of his movies would go down the shitter. This is not the case with Insidious and this is, in no small part, due to his two leads. Patrick Wilson & Rose Byrne are really strong here and portray living, breathing characters in which you are invested. This makes the more supernatural elements of the second half a lot easier to accept. 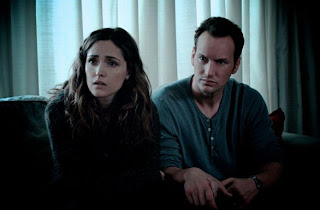 Perhaps most important was that Insidious was actually scary at some points. There were several pretty chilling set pieces and the ghost designs were particularly creepy. There was a clear escalation of haunts, but it never felt one-note. I know Oren Peli (of Paranormal Activity fame) worked with Wan on this, so I wonder how much input he had, as he knows a thing or two about the subgenre.

Insidious is a very solid effort that is heavily influenced by all that came before it, but still manages to explore new ground. A film with scares is really hard these days, but it succeeds by being as real as possible. I have heard that this film is the first of a proposed trilogy of collaborations between Wan, Whannell & Peli and that makes me excited for the future.

Here below, is some video from the red carpet courtesy of Robert Mitchell.

Soooo excited for this one. Which is something I never thought I'd say about a James Wan movie.

I hope this gets a 2010 release, cause I can't wait a fucking year for this thing.

Thanks for the review. This movie was totally off my radar and now I totally want to see it thanks to you!!!